Most establishment scholars belong to a self-imposed cultural ban of any serious discussion regarding the historic significance of international finance in the road to permanent war and the slavery of central bank fiat currency.

The fact that Zionist Banksters make up a disproportionate influence and impact to their population is so toxic that the mere mention of the subject risks the red herring acquisition of anti-Semitism. Regrettably, the task of seeking the truth no longer is the basis of chronicling Western Civilization.  If nothing else, review the Totalitarian Collectivism essay, The Cause and Consequences of World War I, before you close your mind to actual events of the previous hundred years.

In this day of “PC” orthodoxy and political censorship, the viewpoint of Brother Nathanael Kapner stands out as a voice that speaks with authority, having been raised as a Jew. Examine the article, When Woodrow Wilson Went ‘Insane’.

WITH POWERFUL JEWS BEHIND HIM, Woodrow Wilson has done more to bring America into the hands of international Jewry’s pernicious designs than any other president.  As Jewry’s abject pawn, Wilson was instrumental in creating: 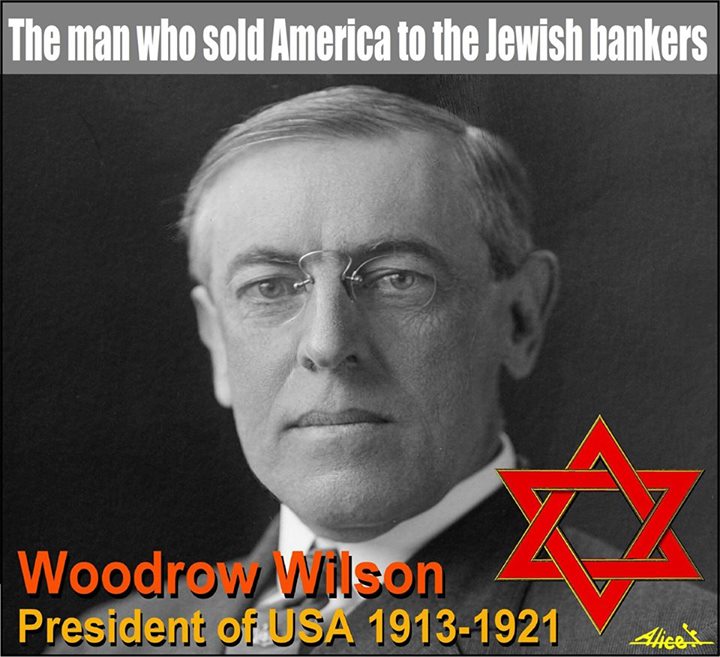 These events should be known by any student of the Wilson Presidency. However, how many know much less accept the following from Brother Nathanael in Woodrow Wilson – Pawn Of The Jews.

THE ZIONIST PLAN TO DOMINATE AMERICAN LIFE was already in motion by the early 1900s.

“A central Bank, legislation for an income tax, and American involvement in a world war, were on the Zionist list of “things to do.”


The key Jewish players, -1- Jacob Schiff, head of Kuhn Loeb Bank; -2- Paul Warburg, brother-in-law to Schiff; -3- Bernard Baruch, a leading Wall Street mogul; -4- and Edward Mandell House, (originally “Huis”), who negotiated cotton purchases in the US for the Rothschilds, only needed a pawn in the White House to bring their Zionist plan to fruition.

In 1910, the four Zionist leaders found their man, (a man of compromised morals known as “Peck’s Bad Boy”), in Professor Woodrow Wilson, recently retired as president of Princeton University.

Already established as a “political academic” and with an opening in the Democratic Party for the governorship of New Jersey, Wilson was financed by Jacob Schiff, Paul Warburg, and their fellow Jewish associate, Henry Morgenthau, Sr., to seat him as New Jersey’s Governor in 1911.”

The key in understanding the President Wilson administration resolves around “Colonel” Edward M. House, advisor and author of the account, Philip Dru: Administrator. Wilson referenced: “Mr. House is my second personality. He is my independent self. His thoughts and mine are one.”

In the archived papers of Colonel House, researcher Stan Monteith found a “typewritten copy of the “Protocols of the Elders of Zion” in the papers of Col. Edward M. House at Yale University. This seemed like confirmation of the widely held view that House (1858-1938) was a Rothschild agent.”

The 99-page House typescript is a different English translation from the Victor Marsden translation, which is most commonly used. (I suspect “The Protocols” were originally written in French, originating in the Mizraim Lodge.)

The most obvious difference is the title.

·     Marsden’s book is, “The Protocols of the Meetings of the Learned Elders of Zion.”

·     The translation in House’s possession is, “Protocols of the Meeting of the Zionist Men of Wisdom.”

In this translation, “meeting” is singular and the “Elders” are clearly identified as “Zionists.”

The significance is that “Zionist” used here is a movement for world domination, not one confined to establishing a Jewish homeland.

The book ALL THE PRESIDENTS’ BANKERS: The Hidden Alliances that Drive American Power by Nomi Prins adds to this discussion. All The Presidents’ Bankers: The Mid-1910s: Bankers Go To War reflects upon the role J.P. Morgan played during World War I.

“Not wanting to leave war financing to chance, Wilson and Morgan kicked their power alliance into gear. At the request of high-ranking State Department officials, Morgan immediately immersed himself in war financing issues. On August 10, 1914, Secretary of State William Jennings Bryan wrote Wilson that Morgan had asked whether there would be any objection if his bank made loans to the French government and the Rothschilds’ Bank (also intended for the French government). Bryan was concerned that approving such an extension of capital might detract from the neutrality position that Wilson had adopted and, worse, invite other requests for loans from nations less allied with the United States than France, such as Germany or Austria. The Morgan Bank was only interested in assisting the Allies.”

Well, missing from this assessment is the contention of Eustace Mullins which puts “forth the supposition that the Morgans were nothing more than Rothschild agents. Mullins wrote that the Rothschilds, “…preferred to operate anonymously in the US behind the facade of J.P. Morgan & Company”.

The popular version that Woodrow Wilson was a man of peace is absurd. His Fourteen Points were a progressive illusion that played directly into the hands of the banksters. “Colonel” Edward M. House worked to secure the acceptance of agreement on topics likely to arise in the anticipated peace conference.

Biographers of Edith Bolling Galt Wilson would have you believe that she was the actual president during most of Wilson’s second term. How naive. The twin instruments of tyranny; namely, debt created money issued by the private central banking system and perpetual internationalist war of empire are the true legacy of President Woodrow Wilson.

As long as individuals are fearful to address the historic record of the globalist cabal of financial enslavement and warfare merchants of munitions, the world will be doomed to damnation . Ignoring this forbidden history guarantees the loss of our mutual survival and cultural heritage. Emerge from your coma and discover reality.