Your military training likely positioned you well to be an asset in corporate. But…you need to translate it so the hiring manager understands how you will add value.

LinkedIn recently released a study that veterans are 160% more likely to have an advanced degree than their civilian counterparts, yet they are also 16%

more likely to be underemployed than their civilian counterparts. Korn Ferry Institute released in their study that 43% of Veterans are more likely to leave their first job in year one if it isn’t a best fit – the most sited reasons being no alignment, no professional development and no clear understanding of upward mobility.

So how does one properly translate their experience so he/she can determine alignment and the hiring manager can clearly see alignment…and despite having more experience and likely a better education than the person sitting across the desk doing the interview, is it wise to take the “starter job” just to get your foot in the door?

In this episode of The Military Wire, David Van Slambrook, Director, Human Resources, Law & Corporate Affairs and Finance at Starbucks, who previous to this job served 28 years in the United States Army, served as a garrison commander, battalion commander, Inspector General, asst. Chief of Staff for United States Pacific Command and retired out as a colonel, shares how he struggled a bit but then got his “break” and how he is helping Veterans “get their break” by better translating their experience.

If you’ve ever wanted to work at an international company that values Veterans and military spouses, be sure to look up David on LinkedIn and message him directly.

This infographic was created by Veteran Car Donations, an organization accepting car donations in Virginia 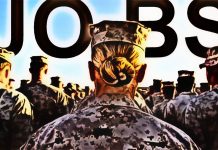