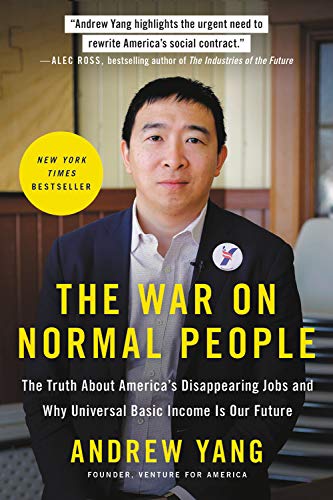 The shift toward automation is about to create a tsunami of unemployment. Not in the distant future–now. One recent estimate predicts 45 million American workers will lose their jobs within the next twelve years–jobs that won’t be replaced. In a future marked by restlessness and chronic unemployment, what will happen to American society?

In The War on Normal People, Andrew Yang paints a dire portrait of the American economy. Rapidly advancing technologies like artificial intelligence, robotics and automation software are making millions of Americans’ livelihoods irrelevant. The consequences of these trends are already being felt across our communities in the form of political unrest, drug use, and other social ills. The future looks dire-but is it unavoidable?

In The War on Normal People, Yang imagines a different future–one in which having a job is distinct from the capacity to prosper and seek fulfillment. At this vision’s core is Universal Basic Income, the concept of providing all citizens with a guaranteed income-and one that is rapidly gaining popularity among forward-thinking politicians and economists. Yang proposes that UBI is an essential step toward a new, more durable kind of economy, one he calls “human capitalism.”

BIOGRAPHY:  Andrew M. Yang (born January 13, 1975) is an American entrepreneur, philanthropist, author, and lawyer who is currently running for President of the United States in the 2020 election. Initially a corporate lawyer, Yang began working in various startups and early stage growth companies as a founder or executive from 2000 to 2009. In 2011, he founded Venture for America (VFA), a nonprofit organization focused on creating jobs in cities struggling to recover from the Great Recession.

The son of immigrants from Taiwan, Yang grew up in New York. He attended Brown University and then Columbia Law School. Dissatisfied with his work as an attorney, Yang began working for various startups during the dot-com bubble before spending a decade as an executive at test preparation company Manhattan Prep, which was acquired in 2009. In 2011, Yang founded VFA, which recruits top college graduates into a two-year fellowship program at startups in developing cities across the United States. The Obama administration selected him in 2011 as a “Champion of Change” and in 2015 as a “Presidential Ambassador for Global Entrepreneurship”. Yang left VFA in 2017 to focus on his presidential campaign. In 2018, he authored The War on Normal People, which outlines several of his campaign’s central ideas.

On November 6, 2017, Yang filed with the Federal Election Commission (FEC) to run for President in the 2020 election. Yang’s campaign has largely focused on responding to the rapid development of automation, which is increasingly leading to workforce challenges and economic instability. His signature policy is the “Freedom Dividend,” a universal basic income of $1,000 a month to every American adult, a response to job displacement by automation, one of the primary factors that he claims led to Donald Trump’s election in 2016. He has also become known for his campaign slogans, including “Humanity First”, “Not Left, Not Right, Forward”, and “Make America Think Harder” (“MATH”). Yang has been considered a dark horse candidate; his campaign has received unanticipated national attention and popularity online, with The New York Times calling Yang “The Internet’s Favorite Candidate”. Yang’s supporters are informally known as the “Yang Gang”. He qualified for all six Democratic debates in 2019, but did not meet the polling requirement for the January 2020 debate. On multiple occasions, Yang and his supporters have criticized media outlets such as CNN and MSNBC for perceived instances of misleading or disproportionate lack of coverage of his campaign in comparison to other candidates.