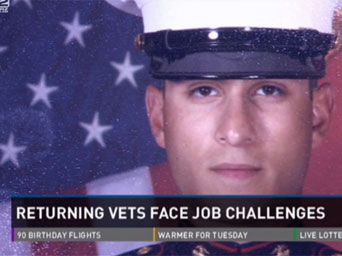 BUFFALO, NY – After returning home from war, veterans are now fighting for jobs at home.

Eric Chiazza, a 23-year-old Buffalo native, served in the Marines for four years and was deployed three times. He has completed tours in Iraq, Haiti, and Afghanistan. Chiazza has been out of the Marines for over a year and is still struggling to find a job that pays well enough to cover his living costs.

“It’s a lot harder to get a job that will pay enough to pay your bills. I applied to a job doing the same thing I was doing in the military which was fueling helicopters, that was my main job, and they paid $8.50 an hour. I was thinking with my whole background that I would at least start a little bit higher,” Chiazza said.

The major problem is that many veterans are unable to find work that fits their unique skill set and pays well enough.  Members of the military are trained to do very specific jobs and perfect uncommon skills, but veterans want employers to know that these skills aren’t useless.

Chiazza firmly believes his training would allow for a more productive and efficient workplace, and that he’s able to easily adapt because of what he’s learned from the military.

“No matter what I do, as long as I’m trained I can think on my feet and learn quickly. I know that I can because I’ve done it before,” Chiazza said.

Chiazza says he’s disciplined and a leader. He wants potential employers to know that he’s able to manage time, projects, and stress in a professional setting. He attributes these skills to his military training, and believes those abilities are exactly what makes veterans great universal job candidates.


“I took resume classes, I had a killer resume. I thought that every job that I applied for, why wouldn’t they want me?… I know that I could succeed in every situation,” Chiazza said.

Many veterans have the option of working in private military contracting overseas for big salaries. After numerous tours and time spent away from his family, Chiazza just wants to get a great job at home.

“I’ve been deployed three times; I don’t want to go back over. Even though the pay is a lot, I really just wish I could get something really good and solid over here,” Chiazza said.

2 On Your Side wants viewers to know about a job fair coming up for veterans and military spouses. The “Hire our Heroes” fair is happening this Wednesday, June 5 from 1 p.m. – 4 p.m. at the Connecticut Street National Guard Armory. More than 60 employers are expected to attend.