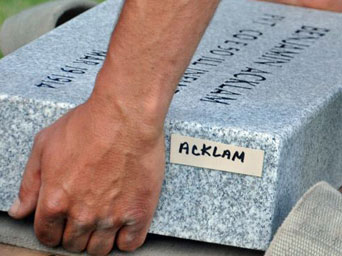 On January 25, 1862, a 17-year old farmer named Benjamin Acklam enlisted as a private in Company E of the 50th Regiment of the Illinois Infantry. Alongside his brother, George, Benjamin would take part in some of the bloodiest battles of the U.S. Civil War, including the Battle of Shiloh and the “March to the Sea,” General Sherman’s Savannah Campaign. At the end of the war, Benjamin and his fellow soldiers of the 50th Illinois marched in the Grand Review on May 24,1865, in Washington, D.C., and continued on to Louisville, Kentucky, where they mustered out later that summer.

Benjamin returned to Illinois, to the land he farmed before enlisting.  He married, had two daughters and a son, and was elected to the board of the 50th’s annual reunion association.  He died in 1914.

A year ago, Benjamin was just a name on a family tree I had put together.  But a Memorial Day weekend trip to Illinois and an exhibit at the Historical Society of Quincy and Adams County helped to not only unravel Benjamin’s story, but led us to the small rural cemetery in which he and his family were buried. The family plot held three generations, including Benjamin’s father, his wife and their son. The family marker was broken and damaged, and Benjamin’s grave was unmarked, with no military marker to honor his service.  My husband and I spent much of the summer learning about the 50th Illinois and Benjamin’s role in the reunion association. We wanted him to be remembered in his final resting place as a Veteran.

Earlier this year, I contacted the Quincy Veterans’ Home, the largest and oldest of the Illinois Veteran Homes. Working with the staff there and at Harrison Monuments, I completed VA Form 40-1330 to apply for a Veteran marker. Through the National Cemetery Administration, VA furnishes upon request, at no charge to the applicant, a government headstone or marker for the unmarked grave of any deceased eligible Veteran in any cemetery around the world, regardless of their date of death. To supplement the application, I was asked to supply the appropriate documentation of Benjamin’s military service, his obituary, and records from the cemetery showing he was buried there. The application was quickly approved and the marker was ordered soon thereafter.

A newly installed marker at the gravesite of U.S. Civil War Veteran Benjamin Acklam. The National Cemetery Administration provides military markers for any deceased eligible Veteran, regardless of their date of death.
Inset: Pvt. Benjamin Acklam of the 50th Illinois Infantry, photographed in 1862 in Corinth, Mississippi.
One year after we first found the forgotten gravesite, two generations of Benjamin’s descendants returned to watch as his military marker was placed. Over this past Memorial Day weekend, much of the family—Benjamin’s 3rd, 4th and 5th great grandchildren—visited the gravesite and placed an American flag in honor of him and his wartime service.  There are dozens of Veterans markers scattered throughout this rural cemetery, including one belonging to Benjamin’s brother, George, who also received a flag from his family members.  Next year, we plan to bring enough flags for all of the Veterans buried there, so that on Memorial Day, no one is forgotten.

Megan Moloney joined VA’s Office of Public and Intergovernmental Affairs in May 2013. A proud military spouse, Megan is the daughter and granddaughter of Army and Navy Veterans who served in World War II, Korea, and Vietnam, and is the fourth generation descendant of both a soldier and sailor who fought during the U.S. Civil War.