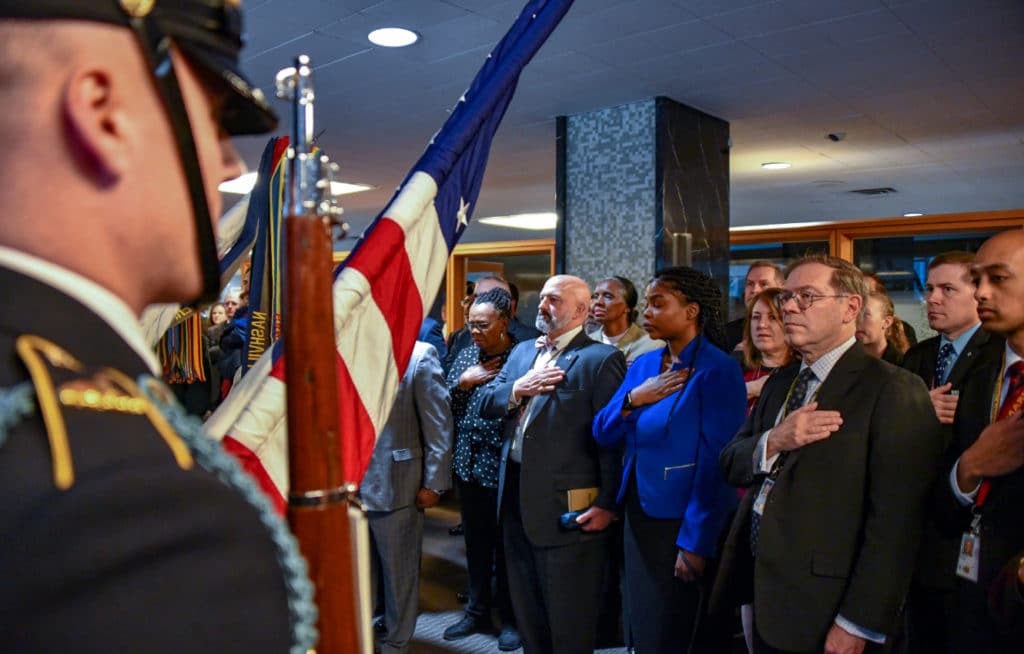 WarOnTheRocks.com – When it comes to civil-military relations when it rains, it pours. President Donald Trump recently threatened to deploy active-duty troops in Washington in response to largely peaceful protests. Secretary of Defense Mark Esper likened the nation’s capital to a “battlespace.” A U.S. senator called for an “overwhelming” show of force against his fellow citizens.

In an extraordinary moment, the chairman of the Joint Chiefs of Staff apologized after appearing in uniform in a photo op with the president after the forcible removal of peaceful demonstrators. And a retired secretary of defense and four-star Marine Corps general broke two years of silence to accuse the president of dividing the United States. But it is important — now more than ever — to fuel a deeper discussion of civil-military relations in order to reveal the varied roots of America’s current political crisis. This is our modest attempt to explore what might be one of these roots.

While various observers have fixated on the maneuverings of civilian and military elites, it is also valuable to consider the landscape of civilian control of the military in such a way that includes a look at the state and health of the civil service workforce.

The slow and steady erosion of civil-military relations is the result of many interlocking issues. Before problems reach the White House — or the streets of the capital — low-level checks and balances are designed to ensure that civilians retain control of defense policy, starting in the corridors of the Pentagon. However, these systems have weakened over time, as an increasing number of recently retired military personnel fill the civil service roles that are designed to keep civilians involved in U.S. national security structures.

Although veterans are also and eventually civilians, they retain a military ethos, training, and sometimes mindset not shared by their colleagues who never served in the armed forces or deployed in conflict. When veterans consistently edge their civilian counterparts out of the federal defense civil service workforce, it disrupts the U.S. national security ecosystem and the tenuous balance of civil-military relations. The consequences are now unfolding in real time and warrant closer scrutiny. Indeed, now may be the time to reexamine the personnel policy of “veterans’ preference” — with an eye toward regenerating the defense civilian (not prior military) workforce.

How the Preference Works

Numerous civilian jobs with the national security community — particularly in the Department of Defense — wind up being filled by former servicemembers as a result of ordered preferential hiring practices. To become a civil servant in the Office of the Secretary of Defense, at a combatant command, an intelligence agency, or the Joint Staff, applicants are forced to run the gauntlet of plugging information into USAJOBS, the behemoth federal government hiring clearinghouse. Within each online job listing, applicants can denote if they served in the armed forces and separated from service, which is called “veterans’ preference.” With it, veterans “may receive preference over non-veteran applicants in the hiring process.”


Alongside veterans’ preference, there is the Veterans’ Recruitment Appointment authority which allows agencies to appoint eligible veterans to certain positions without competition. Additionally, the Veterans Employment Opportunities Act of 1998 created a special hiring authority that allows eligible veterans to apply through job announcements that would ordinarily be limited to current competitive-service employees. In practice, this means that a veteran who served for three or more years can edge out a highly-qualified civilian who never served in the armed forces for a competitive-service position in the civil service, even if that civilian has served in her field for two decades.

During the Obama administration, the interagency Veteran’s Council was also started as part of the Office of Personnel Management, in order to fulfil an executive order, the Veterans Employment Initiative. President Barack Obama’s order stated,

Our veterans, who have benefited from training and development during their military service, possess a wide variety of skills and experiences, as well as the motivation for public service, that will help fulfill Federal agencies’ staffing needs. It is therefore the policy of my Administration to enhance recruitment of and promote employment opportunities for veterans within the executive branch.

It is a laudable initiative to help veterans find employment in the civil service. The plan seems to have worked. According to a 2017 Office of Personnel Management report on veterans’ jobs, “In Fiscal Year (FY) 2017, the Executive Branch of the Federal Government hired 57,062 veterans, representing a veteran new hire percentage rate of 28.1 percent. Veterans currently represent 31.1 percent of the federal workforce compared to 25.8 percent in FY 2009, the year the initiative started.”