DALLAS – The force will be strong with 10,000 deployed service members during free first-run screenings of “Star Wars: The Rise of Skywalker” thanks to the Army & Air Force Exchange Service and The Walt Disney Studios.

Troops in Iraq, Kuwait, Saudi Arabia, Afghanistan, United Arab Emirates and undisclosed locations in Southwest Asia will see the highly anticipated movie for free during its initial run. The special showings of the film start on Dec. 18—two days ahead of its U.S. release—and will roll out through Jan. 5. 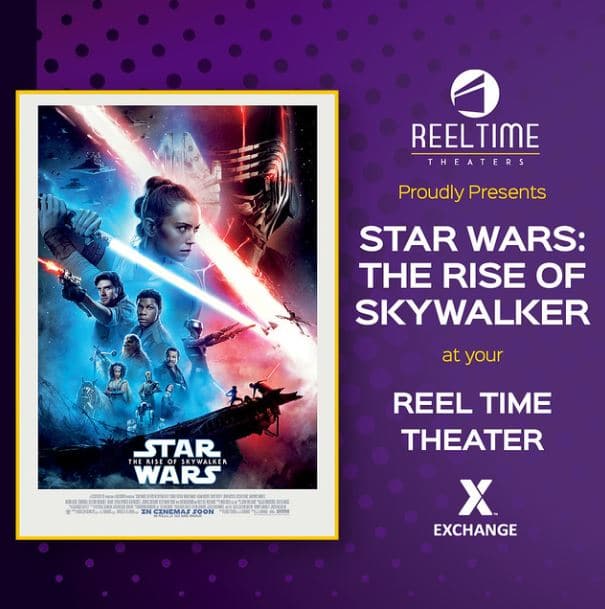 “Since 2012, the Exchange has forged a partnership with The Walt Disney Studios to bring first-run movies to our Nation’s heroes,” said Exchange Director/CEO Tom Shull. “Bringing a blockbuster movie like ‘Star Wars: The Rise of Skywalker’ to deployed troops during the holidays is a big morale boost. These service members are away from family and friends during this special time of year—and seeing a big release at the same time it’s being shown back home strengthens their connection with family and friends and eases the tensions of deployment.”

“It’s a privilege to do something special for these brave men and women,” said Ken Caldwell, Executive Vice President and General Sales Manager for North American Sales and Distribution at The Walt Disney Studios. “This is our way of thanking our troops for their service.”

The free screenings will take place at locations where the Exchange does not operate Reel Time Theaters, however, Exchange theaters in Qatar, Afghanistan, and Kuwait will play the movie during its normal theatrical release.

Facebook-friendly version: The force will be strong with 10,000 deployed service members during free first-run screenings of “Star Wars: The Rise of Skywalker” thanks to the Army & Air Force Exchange Service and The Walt Disney Studios.

Since 1895, the Army & Air Force Exchange Service (Exchange) has gone where Soldiers, Airmen, and their families go to improve the quality of their lives by providing valued goods and services at exclusive military pricing. The Exchange is the 62nd-largest retailer in the United States. Its earnings provided $2.3 billion in dividends to support military morale, welfare, and recreation programs over the last 10 years.

The Exchange is a non-appropriated fund entity of the Department of Defense and is directed by a Board of Directors. The Exchange is a 50th Anniversary Vietnam War Commemorative Partner, planning and conducting events and activities that recognize the service, valor, and sacrifice of Vietnam Veterans and their families in conjunction with the United States of America Vietnam War Commemoration. To find out more about the Exchange history and mission or to view recent press releases please visit our website or follow us on Twitter.