“In telling his story for the first time, Andrew Marble masterfully weaves together how a man whose family fled war-torn Europe helped shape American foreign policy for decades and lived out the values of conscience and country. This isn’t just a must-read for military buffs, it’s a source of inspiration for every American and anyone who aspires to be one.”

“…an astonishingly readable biography of one of the most remarkable leaders in American military history.”

Why was Gen. John Shalikashvili’s career so spectacularly successful? For one, he achieved great heights—serving as chairman of the U.S. Joint Chiefs of Staff, the principal military advisor to the president of the United States (1993-97). But what’s really beguiling is to consider his starting point: How exactly did a stateless, penniless WWII refugee end up serving as the highest-ranking officer in the world’s most powerful military? 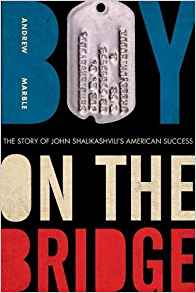 To uncover just that, author Andrew Marble threw himself into almost ten years of full-time research, traveling 30,000 miles, to more than 30 cities, 12 states, three countries, and two continents. He obtained access to two restricted Shalikashvili archives and interviewed more than 300 people, from Shalikashvili himself, to relatives and childhood friends, and even to America’s top national security policymakers from the 1990s, including President Bill Clinton, Gen. Colin Powell, Sec. of Defense William Perry, and Sec. of State Madeline Albright.

The result is the fascinating and inspiring rags-to-riches story, Boy on the Bridge: The Story of John Shalikashvili’s American Success (University Press of Kentucky, Oct 7, 2019). Marble’s biography delves deep into Shalikashvili’s dramatic life story, from his jaw-dropping aristocratic background, to barely surviving the Warsaw Uprising, to fleeing Germany in WWII to escape advancing Soviet troops, and then emigrating to the United States in 1952.

After being drafted into the U.S. Army, he rose steadily through the ranks. Yet what actually most set Shalikashvili apart was his development of an unconventional leadership style – employing expertise, humility, straightforwardness, empathy, and even compassion – that he used time and again to resolve or prevent destructive conflict, particularly during the chaos following the end of the Cold War.

“Boy on the Bridge is not your typical military biography,” Marble says. “This is no academic evaluation of Shalikashvili’s accomplishments as senior commander. Instead, it’s a thoughtful and engaging exploration of his journey to the top via nuanced character study. Behind Shalikashvili’s dramatic American success story lies an at times heartwarming, at times painful, but ultimately affirming personal story of how nature and nurture combined to turn one WWII refugee boy into a very unusual-yet-effective person and leader.

And by learning how Shalikashvili repeatedly worked to make his ever-expanding world a better place, readers from all walks of life can draw lessons on how to work more constructively with others to find effective solutions to common problems.”

Available for interview or commentary, Marble can discuss topics such as:

• The inspiring “rags-to-riches” American success story of Gen. John Shalikashvili
• The powerful lessons we can learn from Gen. Shalikashvili to resolve and even prevent conflict
• 5 techniques at the core of his unique leadership style
• The cross-continent journey Marble took to write this vivid and inspiring biography
• The positive role immigrants play in this country

AUTHOR OF Boy on the Bridge: The Story of John Shalikashvili’s American Success

QUESTION: You’ve written Boy on the Bridge, the first-ever biography of Gen. John Shalikashvili, chairman of the U.S. Joint Chiefs of Staff (1993-97). Please tell us a bit more about the general’s life and your new book.

Andrew Marble, PhD: Sure. Gen. “Shali,” as he liked to be called, was a very unusual person and leader. Boy on the Bridge explores his one-of-kind underdog success story: from immigrant, to draftee, to officer via Officer Candidate School, and finally to the nation’s top military officer and chief military advisor to the president and secretary of defense. And I’ve sought to do him justice by writing one of the most unusual biographies of a military leader you’re likely to read.

Q: Let’s start with your subject. Why was the general so unusual?

Marble: Any movie about his life would seem almost too dramatic and colorful to be true. Just take his European background. Though born in Warsaw, he was a citizen of no country because his parents had become stateless following the collapse of Tsarist Russia. He spent much of his childhood in WWII Poland. Danger was everywhere, like when, during the Warsaw Uprising, his family’s apartment was hit by a dive bomber, forcing them to live in cellars and move through sewers for weeks. Afterward, they escaped to Germany to live off the charity of relatives. The title of the book evokes this low-point in his life—the dramatic evening in Bavaria at the end of the war when he first laid eyes on American soldiers.

But pure luck intervened to bring him to the U.S. in 1952. He came in style—partaking in his first Thanksgiving meal aboard the stately red, white, and blue ocean liner, the SS America. Landing in New York City, he settled down in the country’s heartland, Peoria, Illinois. Poignantly, the U.S. would be the only country to ever award him citizenship.

Q: So his is a great American rags-to-riches success story?

Marble: It’s even more. He was actually born a prince in a long line of Shalikashvili princes dating back to at least the year 1400 in Georgia. His great-grandfather and namesake, Maj. Gen. Jean Shalikashvili, for one, fought with such distinction in the Crimean War that the Tsar Nicholas reportedly awarded him a gold saber and the title “The Brave.”

But his mother’s lineage was even more jaw-dropping. A descendent of the first Russian admiral to circumnavigate the globe, she was born in the Winter Palace in St. Petersburg, where her mother and aunts were serving as a lady in waiting to the last Russian tsarina.

Q: Wow—was it that “riches-to-rags-back-to-riches” story then that you found so unusual, and compelled you to write his biography?

Marble: Both his distinguished ancestry and tumultuous WWII childhood intrigued me, yes. But what most piqued my curiosity was his unusual reputation. Gen. Colin Powell said of his successor, “He’s a quiet, decent man and a very hard worker. There is a mistaken notion that you have to have Pattonesque qualities to be a great general. You don’t need to rant and rave or be an arrogant jerk to be successful. Shali showed that.”

Others found Shalikashvili to be “honest,” “straightforward,” “low-key,” “self-effacing,” and “informal.” A consensus builder who “understands teamwork.” Someone “extraordinarily sensitive in terms of caring for people” and whose humility was “bone deep.” One who balances “firmness” with “compassion.” A man with a voice “seldom raised but always heard.” Someone, all told, who was “enormously loved and respected.”

How many national leaders, civilian or military, can you recall getting such press coverage?

Warm and fuzzies aside, though, this “softer” approach to leadership helped make Shalikashvili a consummate warrior-diplomat, enabling him to guide the U.S., Europe, and beyond through the chaos of the Soviet Union’s collapse. For example, in the first Gulf War’s aftermath he led Operation Provide Comfort, the largest-to-date humanitarian mission, to successfully rescue 500,000 Kurdish refugees trapped in the mountainous Turkish-Iraqi border. After that, he represented chairman Powell in helping secure “loose nukes” in the former Soviet republics. And as NATO’s top military officer and then as chairman himself, he joined forces with fellow immigrant Madeleine Albright on the Clinton administration’s Partnership for Peace initiative and NATO enlargement program of the 1990s.

Q: How does the way you wrote his biography differ from typical military biographies?

A: A more conventional military biography would center on his accomplishments as a general officer, and especially as chairman. While it might include some discussion of his upbringing and rise through the ranks, the main thrust would typically be to analyze how he shaped his epoch and to compare him to other military leaders in history.

But this biography is about the journey, not the destination. By portraying Shalikashvili’s dramatic against-the-odds story of perseverance, it’s akin to how Laura Hillenbrand’s books, Seabiscuit and Unbroken, capture similar stories of grit for a horse and then a POW.

Yet Boy on the Bridge does more than just vividly present a dramatic life story. It’s actually a rigorous and nuanced investigation into a question I found utterly fascinating: How in the heck did he do it? How did a stateless, penniless WWII refugee go on to become the highest-ranking officer in the world’s most powerful military?

The answer, I found, was largely because of who he grew into as a human being—or, put differently, how he became that nominee who garnered such glowing praise over his unique approach to working with others.

It’s also written in an engaging narrative-non-fiction style that keeps names, dates, and jargon to a minimum. What little exposition there is by me, the biographer, only supplements what is a largely character-driven biography.

The book explores not just Shalikashvili, but five exceptional people who shaped him most—his father, a Georgian prince and military man; his mother, a countess turned Red Cross volunteer; his grandmother and great aunt, Baltic German royalty who served as ladies-in-waiting at the last Tsarist court; and his high school sweetheart. The structure of the book is also atypical, relying heavily on flashbacks and jump-forwards both to make important causal connections and to heighten the drama.

Pulling all this together, I’d say Boy on the Bridge is a book that will appeal to military and civilian circles alike.

ANDREW MARBLE holds a PhD in political science from Brown University; an MA in Law and Diplomacy from Tufts University’s Fletcher School; and a BA in East Asian Studies from Middlebury College.

In both 2014 and 2016, he was one of three finalists for the Biographer International Organization’s Hazel Rowley Prize for best proposal for a first biography.

Boy on the Bridge will be available at Amazon, Barnes & Noble, the University Press of Kentucky website and wherever books are sold.