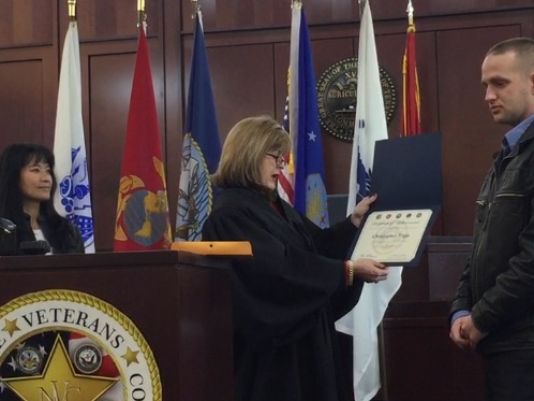 Chris Tripp spent six years obeying the strict discipline of the U.S. Air Force, including during tours in Iraq and Kuwait.

When he was discharged in 2012, he found it challenging to readjust to life in Nashville, his hometown.

“Without everything there I went into a tailspin,” he said. “I found myself back with the same people I was with before the military, doing the same stupid stuff going to the same dumb clubs. Just, I guess, found myself around drugs and substances I had no business taking.”

Police caught Tripp once, and he would have had a felony drug charge on his record if it were not for Davidson County veterans court. The court is an alternative supervision program designed to help veterans who are charged with non-violent offenses. If they complete the program, their charges are expunged.

Tripp and two other men graduated from the program Wednesday. The ceremony was slightly delayed because an investigation of white powder found in an envelope in the criminal court clerk’s office which turned out to be harmless closed the courthouse.

“Read the Full Article at www.tennessean.com >>>>”