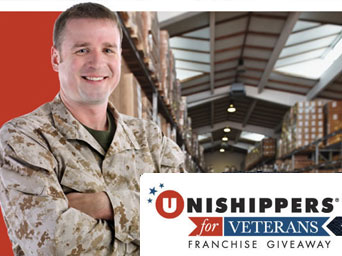 Unishippers Global Logistics, LLC, the nation’s first and one of the largest small package and freight shipping resellers, announced today the launch of a contest that will award a military veteran a free National Franchise. Unishippers’ new National Franchise model allows franchisees to run his or her business from anywhere in the country and serve B2B customers nationwide.

Unishippers was created in 1987 from the simple idea that by partnering with major shipping suppliers and reselling their services, small- and medium-sized business could benefit from the negotiated discounts and dedicated customer service usually reserved for larger companies. With more than 50,000 shipping customers, 6.5 million shipments annually, and industry leading partners including UPS(R) and YRC Freight(R), Unishippers has the experience and buying power franchisees need to be successful.

The Unishippers for Veterans Franchise Giveaway contest will begin accepting entries on May 13, 2013 and will run through July 1, 2013. Unishippers has partnered with USA Cares, an esteemed, non-profit charitable organization that supports post-9/11 service members, to help find the deserving veteran.

To participate, veterans will create a two-minute video explaining why they are interested in ownership of a Unishippers franchise, why they are deserving of a free franchise and how their military experience will help them to be successful. A panel of judges from the Unishippers corporate team will select up to five finalists to be flown to Salt Lake City for a special Discovery Day event where they will meet Unishippers executives, department leaders and the panel of judges. The final winner will be announced on September 10(th) , 2013.

“Success in the military is the result of discipline, accountability, leadership, and an ability to work within an established system,” said Kevin Lathrop, President of Unishippers. “Those same traits make up an ideal foundation to succeed as a franchise owner. That’s why we’re proud to announce this exciting contest that will honor and support our military veterans.”

J.P. Budd, Unishippers franchise owner in Ventura County, CA is a Marine veteran (2000-2005). He opened his Unishippers in March of 2012 and quickly became a rising star in the system and was awarded the Rookie of

the Year award at Unishippers 2012 Annual Convention.    He believes his success is due in large part to his military experience.
“The management and leadership experience the military provided me shortened the learning curve it took to succeed as a Unishippers franchisee,” said Budd. “I also found myself meeting other veterans on my sales calls and our shared experience gave me an immediate connection with them.”

“No one knows the struggles of readjustment back to civilian life better than someone who has been through it,” said David Johnson, a General Manager of several Unishippers and post 9/11 Marine Corps veteran with two combat tours in Iraq by the time he was 20 years old. “These are my people, my brothers and sisters. We share a common bond and if I can help in any way I would be honored.”


Several established Unishippers franchisees are veterans including Sonny Head (Air Force) in Shreveport, LA, Robert Burke (Army) in Baltimore, MD and Neal Manion (Marines) in Toledo, OH. All agree that their experience in the military helped prepare them for the day-to-day duties that are required to be a successful Unishippers franchisee.

“Unishippers believes that the brave men and women who serve in the United States Armed Forces are true heroes,” said Lathrop. “The sacrifices they have made can never be repaid, but their experience and skills should be rewarded.”

For more information about Unishippers and how to participate in the Unishippers for Veterans Franchise Giveaway, please visit UniShippersForVets.com.

Founded in 1987, Unishippers has grown to the largest reseller of shipping services in the nation with more than 290 franchise locations. Headquartered in Salt Lake City, UT, the Unishippers concept is simple — work with major carriers including UPS(R), Saia(R), Estes(R), YRC Freight(TM) and UPS Freight(R) to handle the pickup, transport and delivery of customers’ shipments. All the while, local franchisees work to provide customers with service and support. By leveraging the combined shipping volume of all its customers, Unishippers gets deeply discounted rates from its carriers, resulting in lower shipping costs. Unishippers serves more than 50,000 small- to mid-sized businesses, and has been recognized as a top freight broker by Transport Topics and a top franchise by Entrepreneur, Franchise Times and the Inc. 5000. For information on Unishippers, including information on franchising opportunities and price quotes, visit www.unishippers.com.