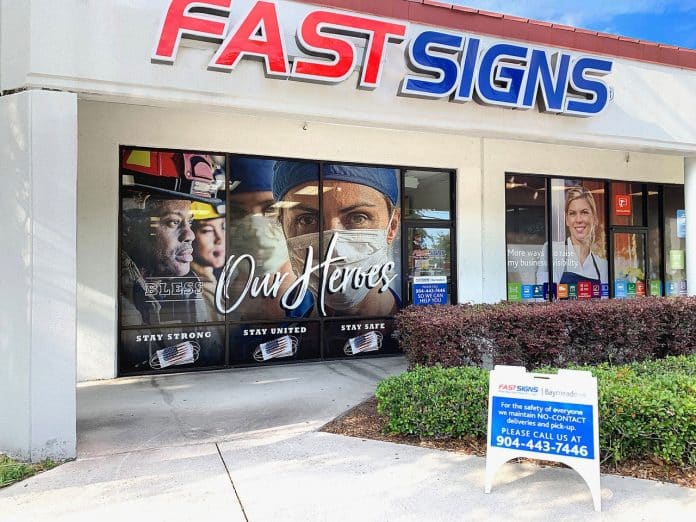 Navy veteran Daniel Nichols doesn’t mind the sometimes long hours he spends at his FASTSIGNS center in The Woodlands, TX. “The Navy taught me not to be afraid of long hours. Ten- to twelve-hour workdays were not unusual at all in the Navy.”

Nichols spent eight years serving in the Navy, with two years of active duty, and six years in the reserves. After the Navy, he took advantage of the G.I. Bill took some classes in I.T., and worked various jobs in that field before considering going into business for himself.

At one of his IT jobs, he met the person who would eventually purchase FASTSIGNS ® of Conroe, TX. This meeting eventually led Nichols to invest in a franchise of his own, and he opened his center on Feb. 17, 2009.

His military experience gave him more than just an appreciation of sometimes long workdays; it’s given him the discipline to manage a business on his own. Discipline is one trait franchises value in their franchisees, and franchise owners can work in a veteran’s favor because of that discipline. His military service also gave him excellent problem-solving skills and the ability to look for solutions to those problems.

Military life is also highly structured, and that’s beneficial when it comes to franchising. Nationwide, according to the International Franchise Association’s VetFran program (Veterans Transition Franchise Initiative), about 12% of all franchisees are veterans and many companies discover that veteran franchisees end up being their strongest performers. 14% of over 760 FASTSIGNS franchises are veteran-owned. Currently, over 100 veterans, men, and women have chosen to become FASTSIGNS franchisees.

“You’ll have a leg-up working within a structured franchise system,” Nichols said.

Being a veteran also has other benefits. Many franchisors like FASTSIGNS offer discounts to veterans making an investment in their franchise. Further benefits can be found through assistance from VetFran.

FASTSIGNS International has a special Veteran Franchise Program with many benefits, including a period of reduced royalties and a discounted initial franchise fee of 50%, along with flexible location options, tax benefits, and financing options. These services are also available for first responders such as police, firefighters, and emergency services personnel.

There is great potential in owning a FASTSIGNS franchise. The signage and graphics industry, in general, is a growing industry generating revenues of over $29 billion annually. FASTSIGNS franchisees average upwards of $906,213 in annual revenue with the top quartile earning 30.2% in discretionary profit.

Clarissa is a PR excutive at BizCom Associates.  Storytelling is as old as time itself and Clarissa is part of this grand tradition.  She connects and inspires by writing to promote her business clients for success.

www.bizcompr.com
EDITORIAL DISCLOSURE
All content herein is owned by author exclusively.  Expressed opinions are NOT necessarily the views of VNR, authors, affiliates, advertisers, sponsors, partners, technicians, or VT Network.  Some content may be satirical in nature.
All images within are full responsibility of the author and NOT VNR.