Home Military The USO and NFL Come Together for the Salute to Service Showdown... 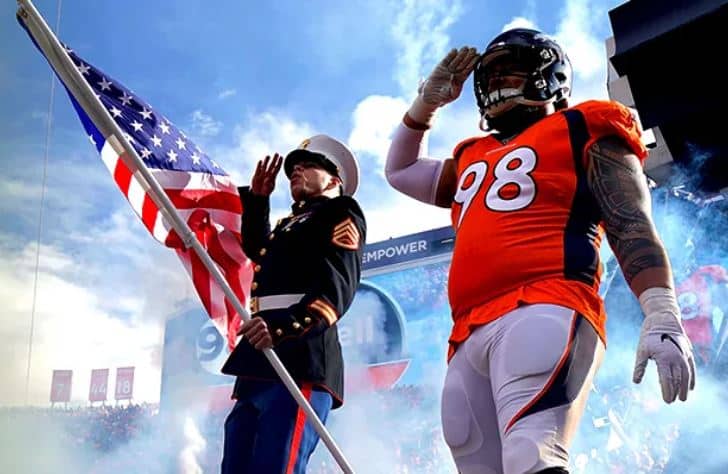 Arlington, VA — With a trip to Super Bowl LVII as the grand prize, the National Football League (NFL) and the United Service Organizations (USO) are partnering to host the second annual tournament of its kind for military service members. The Salute to Service Showdown is open to active-duty service members, National Guard members, and military reservists across the United States. 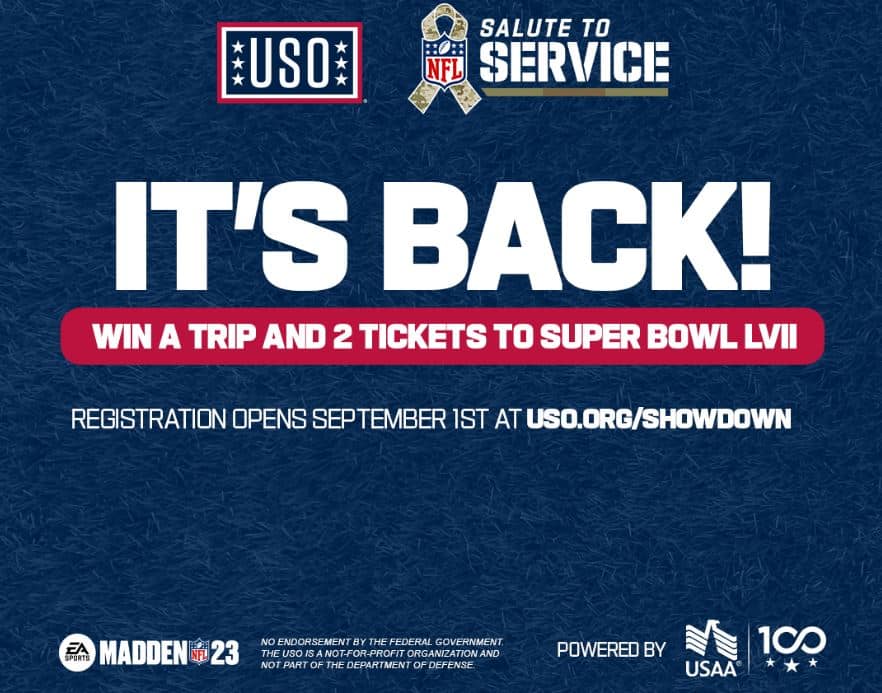 Tournament registration for military members is open at USO.org/showdown, and all are welcome to join the USO Discord (discord.gg/theuso) for tournament details and other USO Gaming updates. Follow #USOMadden for updates on Twitter.

The top eight players (four Xbox, four PlayStation) will win travel and accommodations to play in the finals. The NFL will provide two tournament winners (one Xbox, one PlayStation) with tickets to travel to and attend the Super Bowl, and the USO will provide accommodations. Those who win the USO tournament will also automatically be entered into the Madden NFL 23 Championship Series Last Chance Qualifier hosted by EA.

“Madden, the NFL, and the USO are providing service members with an amazing opportunity to participate in a premier tournament,” said Christopher Plamp, the USO’s senior vice present of operations, programs, and entertainment.

“This partnership continues to deliver on our mission to bring unique experiences to those who are serving and defending our nation, connecting them with their fellow members of the military through gaming and supporting their mental well-being while being away from loved ones.”

With a relationship spanning more than 50 years of history, the NFL and the USO work closely each year to deliver programs and events that honor, empower, and connect service members and military families. In addition to the tournament, the NFL is helping the USO bring gaming to service members, no matter where they serve, with a state-of-the-art gaming mobile that delivers entertainment and connectivity on the go and to remote locations.

“The NFL is proud of our long-standing partnership with the USO through our Salute to Service initiative, and we’re honored to continue this exciting gaming tournament for service members,” said Melissa Pardi, the NFL’s Senior Director of Social Responsibility. “We want service members to know that we appreciate their unique sacrifices, and this tournament is one way we can show our gratitude for all they do.”

The Salute to Service Showdown is powered by USAA, a longstanding USO partner and supporter of its gaming program.

“USAA is proud to support the USO and its Salute to Service gaming initiative which is a fun and exciting way to engage our military service members,” said Jeff Fink, USAA marketing director. “USAA is honored to stand with the USO and NFL and show our service members how much we appreciate their achievements, service, and sacrifices.”

Leading up to the launch of the tournament, EA SPORTS provided the USO with early access codes for Madden NFL 23 so that service members at select USO locations around the world had the chance to play before the game was officially released.

About the USO:
The USO strengthens America’s military service members by keeping them connected to family, home, and country, throughout their service to the nation. At hundreds of locations worldwide, we are united in our commitment to connect our service members and their families through countless acts of caring, comfort, and support. The USO is a private nonprofit organization, not a government agency. Our programs, services, and entertainment tours are made possible by the American people, the support of our corporate partners, and the dedication of our volunteers and staff. To join us in this important mission and learn more about the USO, please visit USO.org or follow us on Facebook, Twitter, and Instagram.

About the NFL’s Salute to Service:
Salute to Service is the NFL’s year-long initiative to honor, empower and connect our nation’s service members, veterans, and their families. Since 2011, this effort has raised more than $58 million for military and veteran support organizations such as the Bob Woodruff Foundation (BWF), Pat Tillman Foundation (PTF), Tragedy Assistance Program for Survivors (TAPS), United Service Organizations (USO) and Wounded Warrior Project® (WWP). For more information on Salute to Service, visit NFL.com/Salute

About USAA: Founded in 1922 by a group of military officers, USAA is among the leading providers of insurance, banking, and investment and retirement solutions to more than 13 million members of the U.S. military, veterans who have honorably served, and their families. Headquartered in San Antonio, USAA has offices in eight U.S. cities and three overseas locations and employs more than 38,000 people worldwide. Each year, the company contributes to national and local nonprofits in support of military families and communities where employees live and work. For more information about USAA, follow us on Facebook or Twitter (@USAA), or visit usaa.com.