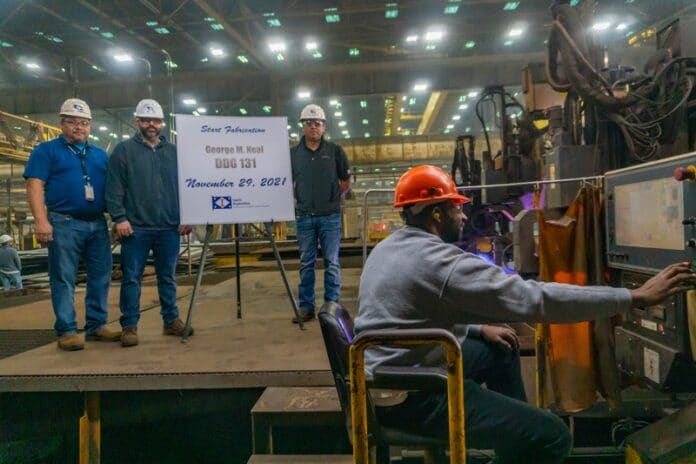 “Start of fabrication is our first opportunity to formally celebrate and reflect on our contributions as shipbuilders,” Ingalls Shipbuilding President Kari Wilkinson said. “We are very proud of what we do here for the country and endeavor to do our part in building and activating what will be the newest Flight III destroyer.”

A photo accompanying this release is available here.

The new destroyer’s name honors a Korean War veteran, Aviation Machinist’s Mate 3rd Class George M. Neal, who was awarded the Navy Cross for his heroic actions while attempting to rescue a fellow service member. Neal volunteered as crewman to fly in a helicopter deep into North Korean mountains to attempt the rescue of a Marine aviator who had been shot down and was trapped by the enemy. During the rescue attempt, under heavy enemy fire, Neal’s helicopter was disabled and crashed. He assisted his pilot and the rescued aviator in evading enemy forces for nine days before being captured and held as a prisoner of war. Neal was eventually released and returned to the U.S. with more than 320 fellow POWs in 1952.

Arleigh Burke-class destroyers are highly capable, multi-mission ships and can conduct a variety of operations, from peacetime presence and crisis management to sea control and power projection, all in support of the United States military strategy. Guided missile destroyers are capable of simultaneously fighting air, surface and subsurface battles. The ship contains myriad offensive and defensive weapons designed to support maritime defense needs well into the 21st century.