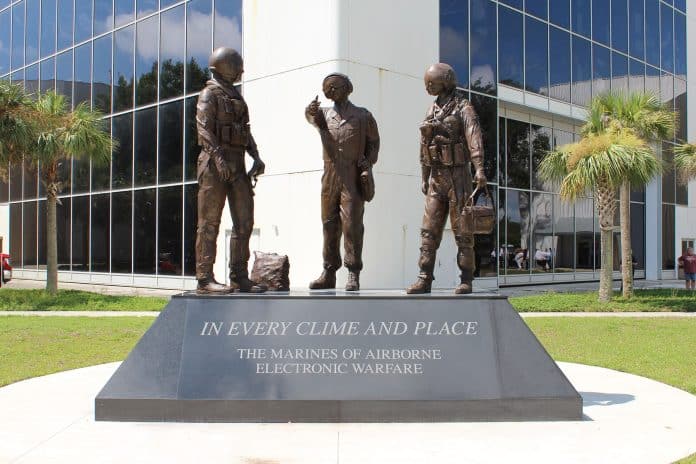 Pensacola, FL, – The VMAQ Monument Foundation is thrilled to announce the installation of its three-figure bronze monument “In Every Clime and Place” – The Marines of Airborne Electronic Warfare, at the National Naval Aviation Museum in Pensacola, Florida.

The Foundation commissioned renowned sculptor, Sandra Van Zandt from Owasso, OK, to create three bronze statues representative of the people who served in the EA-6B Prowler squadrons: a pilot, an Electronic Counter Measures Officer (ECMO), and an aviation maintenance Marine as they prepare to launch a flight. The monument will preserve and promote the legacy, history, and accomplishments of the Marines who flew and maintained the EA-6B electronic warfare aircraft for more than 40 years, which is now out of service.

The connection between the VMAQ community and Naval Air Station Pensacola has deep roots. Many VMAQ Marines served in Pensacola to conduct flight or maintenance training. Pilots and Electronic Countermeasures Officers (ECMOs) have been earning their wings in Pensacola for decades. The museum currently has a Northrop Grumman EA-6B Prowler, a Martin-Baker ejection seat, an AGM-88 high-speed anti-radiation missile, and various VMAQ squadron plaques on display – all very familiar to the VMAQ Marines. 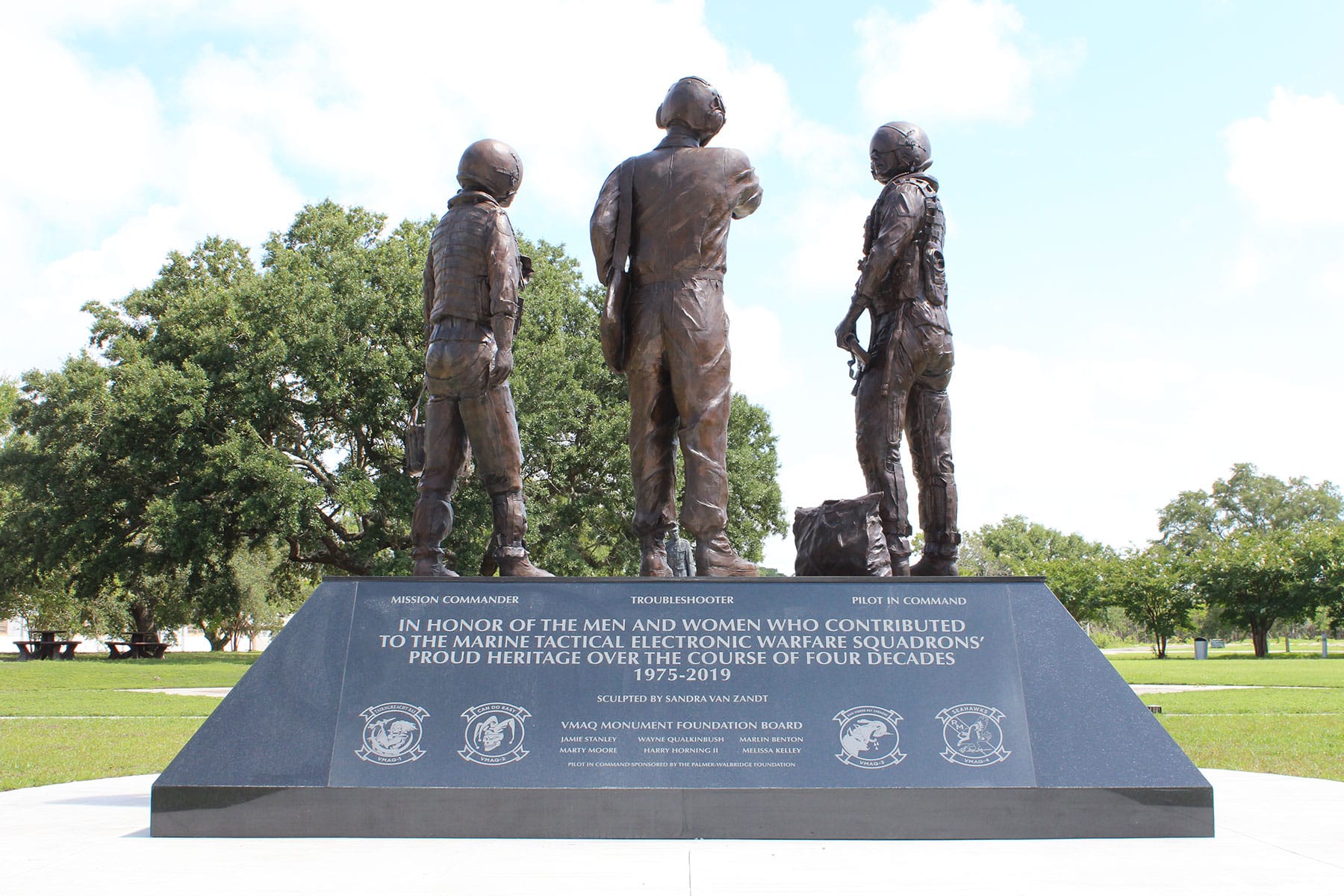 Van Zandt has ties to the National Naval Aviation Museum, as well. She sculpted The Spirit of Naval Aviation, which has been prominently displayed in the museum’s atrium since 1996. “When you have the opportunity to place one of your art pieces in a very prestigious museum, like the one in Pensacola, it is very rewarding – and now I have two pieces here!” Said Van Zandt. “It is very humbling to think I was chosen out of all of the prominent sculptors, to save this important piece of Marine Corps history for future generations.”

The figures were picked up from the Omega Bronze foundry in Smithville, Texas, and transported to Pensacola, FL on Thursday, July 14, 2022. The figures were then carefully placed on the granite base and bolted to the frame under the granite. Each figure weighs between 600-700 pounds! Van Zandt’s team of installers, led by her husband, Doug, personally transported and installed the monument at the museum. Among them is a granite specialist, a welding specialist, and a frame support specialist. Doug Van Zandt served in the Marine Corps infantry from 1963-1967, 3rd BN, 3rd Marines.

The completed monument is a sight to behold, both for its historical component and as a towering piece of art. Van Zandt captured stunning detail down to the braid on the female ECMO, pages of the kneeboard, pens in the outer pocket of the flight bag, survival vest equipment – even the folds of a well-worn boot. “After four arduous years, as I stand in front of the
completed monument with Sandra Van Zandt at my side, I cannot express all of the emotions I feel – the monument is beautiful, stunning, humbling – it is everything we hoped it would be!” exclaimed Chairman of the Board, H. Wayne “Duck” Qualkinbush, USMC Maj (Ret). “I’m so proud of our board members, volunteers, and donors. We’ve done something extraordinary that some thought impossible!”

CAPT Sterling Gilliam, USN (Ret), Director, National Naval Aviation Museum is excited about the new bronzes. “Today is a great day for our Museum! The VMAQ monument is a spectacular addition to our campus and will serve as the cornerstone for our ‘Walk of Honor’ project. God bless the Marine Corps!