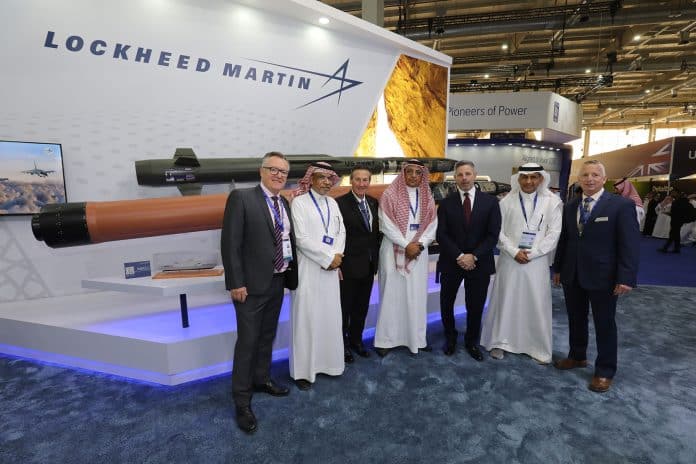 RIYADH, SAUDI ARABIA – The General Authority for Military Industries (GAMI) has announced today in the World Defense Show, its approval of two localization projects: the first, for localizing the manufacture of missile interceptor launchers, and the second for producing the missile interceptor canisters locally. In collaboration with Lockheed Martin, these projects fall under the program for localization of the THAAD Weapon System.

Such projects serve GAMI’s strategy to bolster relations with its international partners from across the globe along the Kingdom’s localization journey, with the ultimate target of localizing more than 50% of expenditure on defense equipment and services by the year 2030.

Commenting on this momentous announcement, Gasem Al-Maimani, GAMI Deputy Governor, Military Industry stated that these two localization projects are in further service of this promising sector’s national priorities. Along this localization journey, and with the robust relations with our international defense partners, air domain defense readiness is expected to be greatly enhanced, said Al-Maimani.

He further noted that this project supports investment in building indigenous national capabilities, via empowering new and up-and-coming manufacturing entities, as well as leveraging the integration of efforts with large national companies, to secure their position of prominence globally. Ultimately, all of this facilitation and enablement pours into achieving the sector’s strategic localization target of more than 50% and amplifying the scope and impact of existing capabilities, by 2030.

“For over 50 years, Lockheed Martin has been a committed partner to Saudi Arabia, as the country continues its journey toward ensuring a safe, secure, and sustainable future for its people,” said Joseph Rank, chief executive for Lockheed Martin in Saudi Arabia and Africa. “Along with state-of-the-art defense products and innovative solutions, Lockheed Martin is engaged with its Saudi partners across several capacity-building programs that are formulated to contribute to the realization of the country’s development goals. This announcement will significantly boost global and regional security while supporting job creation and economic prosperity in Saudi Arabia.”


GAMI looks to secure its core national priorities, namely Military Readiness, Strategic Autonomy, Transparency and Efficiency of Spend, Sustainability of Local Military Industries, and Interoperability within and across Entities.

World Defense Show is a display and demonstration of integrated and innovation-driven defense solutions, set to serve as the global stage for defense interoperability. The inaugural World Defense Show will take place biennially starting March 2022 in Riyadh – Saudi Arabia, to showcase the latest in interoperable defense solutions. To learn more about the show, visit www.worlddefenseshow.com

About General Authority for Military Industries

The founder of World Defense Show, Saudi Arabia’s General Authority for Military Industries, is the regulator, enabler, and licensor for the kingdom’s military industry. GAMI is responsible for domestic defense sector development in line with KSA’s commitment to Vision 2030 and to localize 50% of military manufacturing by 2030.