21st-Century archaeological techniques will pinpoint the location of the Hornwork, a key feature of the city’s Revolutionary War defenses

CHARLESTON, S.C. – Just below the surface of one of the most popular parks in Charleston, lies a significant archaeological and historical treasure that demonstrates the resilience of early Charlestonians in defending their country from the invasion attempts of the British. Leveraging modern technology, local experts plan to document the exact footprint of this fortification in Marion Square, known as the Hornwork, and share the stories of its significance in the nation’s fight for independence. 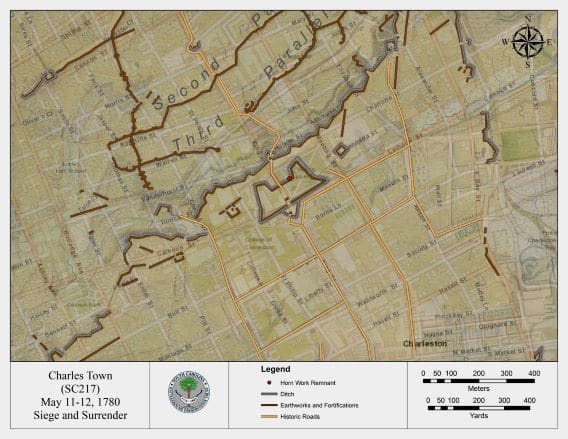 The Hornwork was a large fortification built-in 1758 that created an intimidating defensive line in the protection of Charleston. Constructed of tabby, a mixture of shells, sand, and lime, the structure was a massive 30-foot tall fortification spanning three city blocks. The hornwork and its surrounding ditch or moat occupied a space measuring approximately six to eight acres.

The tabby walls, which extended to the east and west of King Street, measured between six and seven hundred feet across. The elevation of the front (north) wall was between ten and twenty feet high. While a remnant of the Hornwork remains visible in Marion Square today and archeologists know its approximate outline, this project is the first to completely document the exact footprint of the Hornwork and to provide educational resources to explain its significance.

The project is led by Charleston-based, South Carolina Battlefield Protection Trust (SCBPT) and the American Battlefield Trust. “South Carolina is rich with Revolutionary War stories yet to be told,” commented Doug Bostick SCBPT executive director. “This research is just the first step in sharing the story of the defense of Charleston.”

Jim Lighthizer, president of the American Battlefield Trust, noted that ultimately this work will yield a gateway experience for The Liberty Trail, a statewide network of Revolutionary War sites proposed by the partners. “We envision a state-of-the-art augmented reality program to allow Marion Square visitors to see the Hornwork and where it fits on the modern landscape. Traditional interpretive signage will further educate visitors.”

Sarah Nell BlackwellClemson/College of Charleston Historic Preservation graduate students will employ ground-penetrating radar to map the precise footprint, which is known to be as little as 12 inches below the surface in places. The data can then be processed to determine the exact outline of the Hornwork.


Work will commence at the beginning of February and will continue throughout March during periods when the square is not in heavy use. “This is exactly the kind of project we love for our students,” noted Jon Marcoux, Ph. D., Director of Clemson/College of Charleston graduate program in historic preservation. “They get a hands-on learning experience within the context of a real-world preservation project. It is also great to see the results of their work employed in such a forward-looking initiative.”

A number of other state and local organizations are participants in the project including the Charleston County Library, the Charleston Museum, the South Carolina Institute of Archeology and Anthropology, and the Washington Light Infantry and Sumter Guards.

“This effort to create an accurate map of the hornwork’s surviving foundation will enable us to answer many important questions about its geometry and construction,” commented Nic Butler, Ph.D., historian, Charleston County Public Library.

“Most Charlestonians and visitors don’t realize that the hornwork was a massive and impressive structure, but the results of this survey will help the public to re-imagine the towering fortification that once guarded Revolutionary Charleston.

“The Charleston Museum is pleased to participate in this project to further define the footprint of the Revolutionary War-era Hornwork,” commented Carl Borick, director of the Charleston Museum. “Given its importance to the 1780 Siege of Charleston, the largest battle fought in South Carolina during the Revolutionary War, this will be a key location for the state’s Liberty Trail and an important way for both locals and visitors to the area to learn about the state’s important contributions to the war that gave this nation its independence.”

For more information on The Liberty Trail initiative, including historical background and a list of those sites that are part of the Initial Phase of the project, visit www.thelibertytrail.org

As The Liberty Trail takes shape, partners, friends and history enthusiasts are invited to follow its progress on social media using the hashtag #TheLibertyTrail.

(Images by Sarah Nell Blackwell for The Liberty Trail)