TUSCALOOSA, Ala. — While many University of Alabama students will drive or fly to their destinations for the Thanksgiving break, one group of student veterans will be marching to theirs — all the way from Tuscaloosa to Auburn. 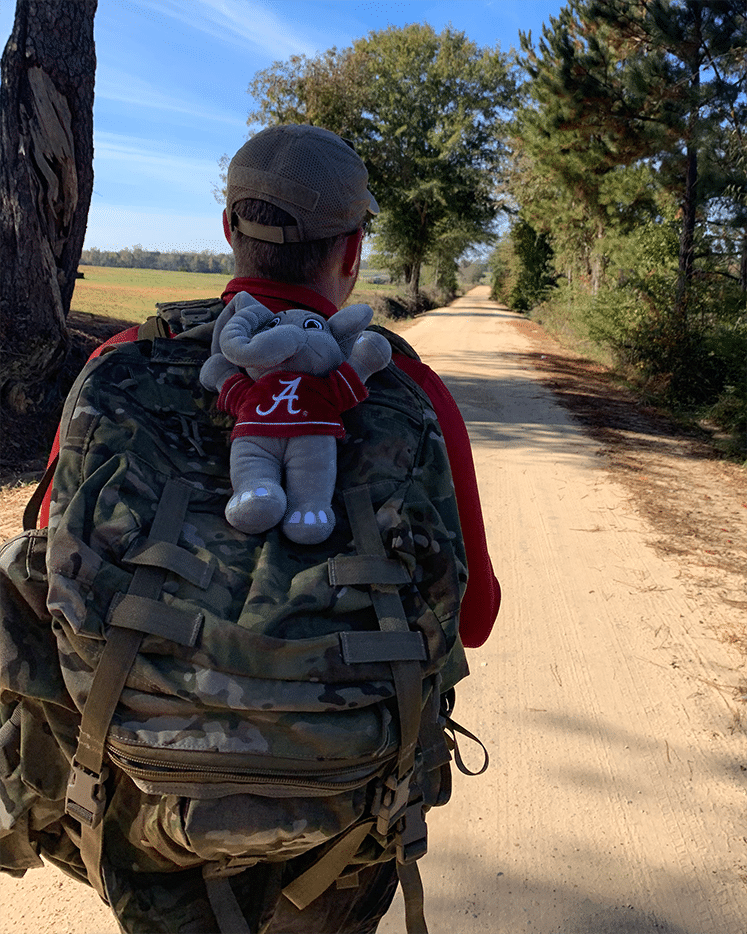 A ruck march is a military term for a hike with a heavy backpack, explained Slade Salmon, a U.S. Marine Corps veteran, who is a junior operations management major from Atlanta and president of UA’s Campus Veterans Association.


“It was one of the most miserable three days of my life, and I couldn’t wait for it to come around again.”

“For people who don’t know, 22 veterans commit suicide every day,” Salmon said. “We’re trying to raise public awareness for that and get the message out that this is happening.”

“I feel like all veterans need to ban together. One veteran that commits suicide is too many. We all spent however long it was, or however short it was, in the military. We became brothers and sisters in arms, and we need to check on each other and make sure everybody is ok.”

In addition to supporting Mission 22, each student veteran will carry 22 pounds of donations in their rucksacks for the Bill Nichols State Veterans Home in Alexander City and Three Hots and a Cot, an organization that assists homeless veterans. The donations include socks, gloves and other winter clothing, toiletries and canned goods. Monetary donations will also support Mission 22.

During the three-day trip, each student veteran will hike approximately 50 miles. They walk for 2 ½ hours before climbing into a support vehicle for about five hours of rest before their next hike.

On Thanksgiving Day, the students will take an extended break at a church that is about halfway between the two stadiums and enjoy a meal prepared by a few of their families.

Operation Iron Ruck will end Saturday morning outside Jordan-Hare Stadium in time for the student veterans to see Alabama and Auburn face off in the annual Iron Bowl.

To make a donation or to learn more about the UA Campus Veterans Association, contact Salmon at [email protected] or 205-348-0983.

The University of Alabama, the state’s oldest and largest public institution of higher education, is a student-centered research university that draws the best and brightest to an academic community committed to providing a premier undergraduate and graduate education.

UA is dedicated to achieving excellence in scholarship, collaboration and intellectual engagement; providing public outreach and service to the state of Alabama and the nation; and nurturing a campus environment that fosters collegiality, respect and inclusivity.

Find additional news from The University of Alabama