“It’s always too early to quit.” That could have been the motto of Andrew Jackson Higgins, the man who never gave up in his quest to design and provide the perfect boats needed for important missions during World War II. It was his determination and perseverance that led to the use of the Higgins’ boats for the important D-Day invasion and, eventually, to the end of the war. 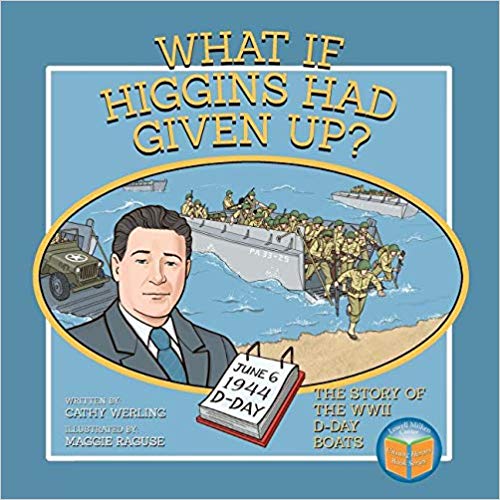 In What If Higgins Had Given Up?, children learn that it often takes perseverance and that “never-give-up” attitude to reach our goals in life. Even as a child, that important character trait was evident in the life of Andrew Higgins. From his successful lawn mowing business to the boat he built in his family basement and carried outside by removing bricks in the basement wall, Andrew’s childhood was filled with similar stories of determination. That same attitude of keeping on, even when facing obstacles, continued through countless ventures in Higgins’ adult life, as well. The famous Higgins’ D-Day boats in World War II were a result of that perseverance and prompted President Eisenhower to say, “It was Andrew Jackson Higgins who won the war for us.”

What If Higgins Had Given Up? – The Story of the WWII D-Day Boats is the fourth in a series of children’s books about the amazing Unsung Heroes featured at the Lowell Milken Center for Unsung Heroes in Fort Scott, Kansas. Through Higgins’ story and those of other Unsung Heroes, the Center helps students, educators and communities recognize the value of each person in effecting positive change in the world.

Cathy Werling, the author, is an award-winning and recently retired elementary educator. Her passion for helping students develop positive character traits and seek out worthy role models led to her part time work at the Lowell Milken Center for Unsung Heroes. Through her series of books about these humble heroes, Cathy inspires elementary children to also be those people who make a positive difference in the lives of others.