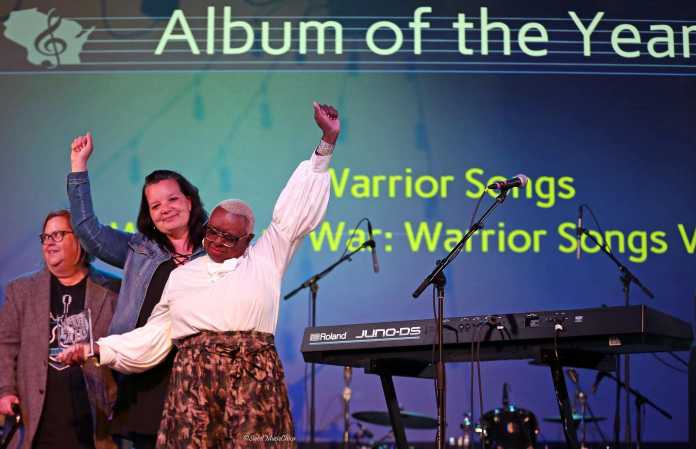 The show and ceremonies took place in Milwaukee, WI at the Turner Hall Ballroom. For 39 years WAMI has recognized the achievements and accomplishments of individuals in the Wisconsin music industry through their work.

Six Wisconsin vets have songs showcased on “Women at War” which features 15 songs of women veterans from across the country.

In accepting the Album of the Year award Warrior Songs founder Jason Moon said, “Many thanks to WAMI for recognizing the importance of music in healing military trauma and the incredible contribution of women to our Armed Forces. This album is the first time in the history of music that the firsthand stories of women veterans have been turned into songs. And Wisconsin is now the first state to recognize that with this Album of the Year award.”

Warrior Songs is a non-profit organization based in Madison, Wisconsin. Their mission is to facilitate healing amongst United States military personnel, veterans and those working with veterans by using songwriting and the arts as vehicles.

“Women At War” is the second release from their Story to Song program, matching women veterans with artists who are talented in storytelling and music. It is designed to transform buried experiences and feelings into a song that heals and entertains while also educating, motivating and inspiring.

“Warrior Wings”, a song from “Women at War”, has also been submitted for Song of the Year at the 2019 Native American Music Awards (NAMMY) to be held in Niagara Falls in October.

At the front end of the Story to Song process, material is chosen that represents important issues faced by veterans and that have the potential to be converted to song. Professional songwriters, musicians and recording studios are used to produce each volume released. Whenever possible songwriters and musicians who are military veterans are included in the process of recording, producing and marketing the CD’s.


Warrior Songs produces a CD compilation every two years, each focusing on a different aspect of returning military veteran’s stories. Work is currently underway on 2020’s Vol. 3 release, “The Last Thing We Ever Do”, featuring songs from Vietnam era vets. Volumes 4 – 6 are already slated for production every-other-year through 2028, when Warrior Songs will have created six CD’s over 12 years of working with military veterans.

Since 2013, Warrior Songs has distributed 22,000 of its CD’s free to veterans across the world, worked with over 6,000 vets through its programs, and educated over 16,000 civilians.

Warrior Songs founder Jason Moon and some of the “Women At War” vets, musicians and songwriters are available by phone, Skype or email for interviews. Media staff can also request downloads of songs from Warrior Songs through the contact info above.

The music can be downloaded here at WarriorSongs.org.