We often see soldiers heading off to combat, but what happens to the families of those who never return home? Or those who do come back but are haunted by their combat experiences?

Former Green Beret turned playwright Scott Mann has brought the battlefield to the stage in “Last Out: Elegy of a Green Beret.” He is using the stage to help veterans and families let go of the pain of war.

LAST OUT began its theatrical journey as a one-person show when Scott was a student in Florida Studio Theatre’s “Flying Solo” course. Working side by side with FST’s Jason Cannon, Scott drew from both his experience as a Green Beret in combat and his training at FST to write and perform the play. The 23-year Army Veteran spent 17 of those years fighting the war on terror.

Taking two years to complete, LAST OUT is based on true stories of war. He said goodbye to his wife and boys 17 times in 10 years and the father of 3 estimates he spent a total of 4-to-5 years away from home. Scott lost 23 years in battle and keeps a piece of granite from the Pentagon near the stairwell where his best friend Cliff was killed on Sept. 11, 2001. He says that this is the first piece of ‘payback’ for his friend being killed.

LAST OUT will kick-off the 2019 tour in Albuquerque, New Mexico, with a compelling cast followed by shows across the country, with an all veteran cast and musical score. LAST OUT is a theatrical experience intended to help civilians better understand the cost of combat to our veterans and their families, and to help warriors utilize the power of story to let go of their pain, healing the wounds of war. For a full list of tour dates and for more information about the production and cast, please visit: www.lastoutplay.com. 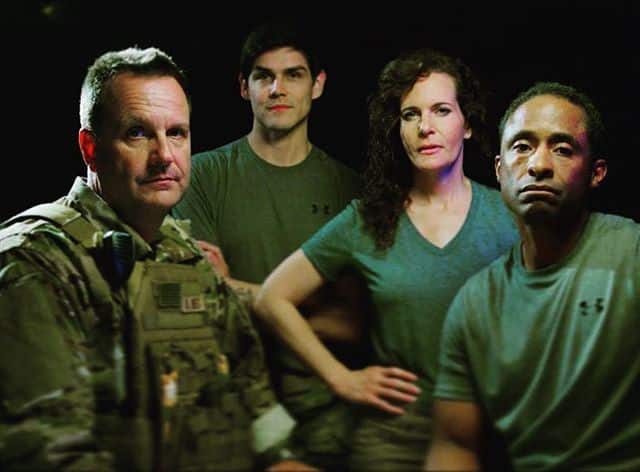 Ret. Lt. Col Scott Mann spent 23 years in the United States Army, 18 of that as a Green Beret, where he specialized in unconventional, high-impact missions all over the world including Colombia, Ecuador, Peru, Panama, Iraq and Afghanistan. In the same way he empowered local tribes in Iraq and Afghanistan to make transformative decisions, using very few resources, Scott now teaches the relationship-building techniques that drove so many of his successful combat operations.

Army Green Beret Danny Patton is a modern-day warrior fighting battles that range from tribal Afghanistan to his own living room. As the corrosive gears of war start to rip his family apart, his integrity, and his soul, Danny is thrust into his final, eternal mission. On the other side with Valhalla beckoning, he discovers that combat can be fueled with vengeance or by love, it depends which price you are willing to pay.