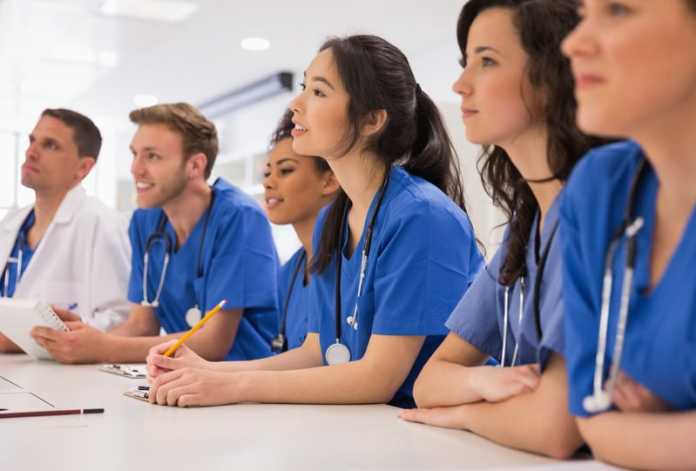 · Just 45 percent of medical school tuition covered by aid compared to 85 percent for law and 100 percent for MBA programs
· Shortfall adds up to an extra $110,000 for veterans in MD programs, despite receiving GI Bill benefits

CHICAGO – Tuition aid supported by the U.S. Department of Veterans Affairs for military veterans enrolling in medical school covers a smaller proportion of tuition compared to aid for other graduate programs, according to a Northwestern Medicine study.

The study will be published in the Journal of the American Medical Association Sept. 18.


“There’s room for improvement; medical schools could be using their scholarship dollars much more effectively,” said Graves, who remains a captain in the USMC Reserve.

VA tuition aid for veterans largely comes from the Post-9/11 GI Bill, a scholarship program available to all honorably discharged veterans that can be used for most undergraduate and graduate education.

Supplementing that aid is the Yellow Ribbon (YR) program, an opt-in program that matches an aid contribution from an academic graduate program. For example, if a medical school offered a scholarship to veterans worth $8,000, the YR program would match that sum.

However, when entering medical school, Graves noticed program participation was low when compared to the business and law school at Northwestern and at other schools across the country.

“They all followed the same trends,” Graves said.

He analyzed national tuition and aid data from medical, law and business school programs at more than 100 schools.

Graves found the cost of attending medical school for veterans was consistently higher than other graduate programs, with an average of just 45 percent of tuition covered by aid — in comparison to an average of 85 percent for law programs and 100 percent for MBA programs.

“We think this is due to MD programs bench marking their support levels to other MD programs and not looking at other professional degree programs,” Graves said.

This is compounded by the relative lack of veterans in medical school when compared to other graduate programs, according to Graves.

“While the Post-9/11 GI bill is mandatory, there are no requirements for participation in the YR program, so it’s not as consistent and contributes to the discrepancies in aid we found,” Graves said. “All professional programs should reexamine their participation levels and determine if they are adequate.”

However, boosting the YR program is not enough. There’s no concrete information about the number of veterans enrolled in or graduating from medical school, complicating research in this area. Graves hopes to remedy this in a future study, using medical school application, tuition and scholarship data to analyze how aid affects if and where veterans attend medical school.

“Veterans bring a distinct perspective to professions and occupations,” Graves said. “Research has shown 10 percent of the U.S. populace are veterans, and around half receive their care at the VA. With recent shortfalls within the VA health care system, all avenues to improve care should be explored, such as increasing the number of veteran physicians in practice and prompting policymakers to consider how health care education can enhance care for veterans.”

The research reported in this publication was supported by grant 4P30CA060553-22 from the National Cancer Institute of the National Institutes of Health.