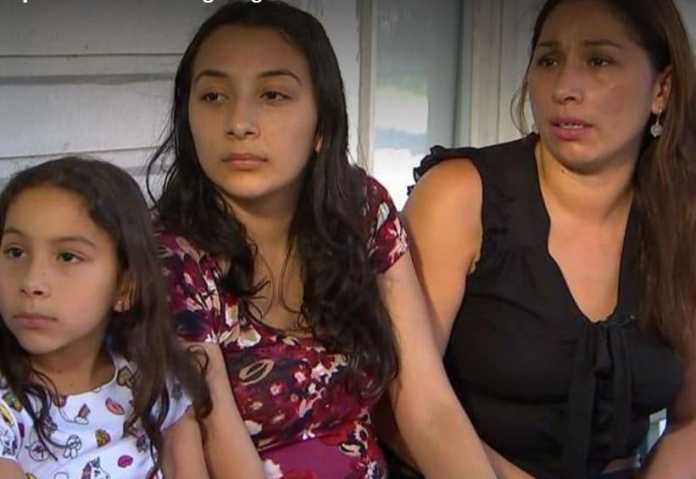 KISSIMMEE, Fla. — The wife of an Iraq War veteran wiped away tears and held her young daughters as she said goodbye to her family at Orlando International Airport on Friday morning — not knowing the next time they would all be together.

Unfortunately this is fairly common as our US Government led by a 5 time time deferment coward who RAN away from serving his country when called upon continues to ask our men and women to put their lives on the line for them while disrespecting their families and treating them like they don’t matter.  This is the bizarro world we live in right now in the USA.  It’s ass backwards!  We respect those who DON’T EARN IT and disrespect those that do…. what’s wrong with US?

Alejandra Juarez, who entered the United States illegally from Mexico more than 20 years ago, had pleaded publicly for President Donald Trump to stop her deportation. But a letter delivered to the White House this week by members of Congress wasn’t enough to keep her with her husband, a naturalized American citizen, and their two American-born daughters.

“My mom is a good person and she’s not a criminal,” daughter Pamela, 16, told the media as she sobbed and covered her face.

Rep. Darren Soto, D-Fla., who was at the airport, said he told Juarez, 39, that he was sorry that she had to be deported under Trump’ s “zero tolerance” immigration policy.

“We’ll still be pursuing our request to the administration for her case, and we are not giving up despite this anti-immigration rhetoric,” Soto told NBC News.

Juarez was flying back to Mexico alone, although her youngest daughter, Estela, 9, would later be joining her, said the family’s attorney, Chelsea Nowel.

“She is on her way to Mexico where she has no support system and knows essentially no one,” Nowel said in a text message.

Juarez had been living in Davenport, Florida, with her husband, Cuauhtemoc, also known as Temo, and their two daughters. Temo, who describes himself as a conservative who voted for Trump, had written his own letter to the president asking for a reprieve for his wife, reported Stars and Stripes.

Juarez said she was escaping violence in her home country when she crossed into the United States illegally. Three years later she met and married Temo in Florida.

“I came here illegally. I’m ashamed of it. I know I did something wrong,” Juarez told NBC News in an interview before she was deported. “I seriously thought that was the only exit out of a situation I was living in. I think that saved my life.”

Temo served in the U.S. Marine Corps and later joined the Army National Guard in Florida. He came to the U.S. from Mexico as a child and was naturalized days before he was deployed to Iraq. The couple has two daughters, ages 9 and 16, both born in the United States.

“It’s common for ICE to take the passport to ensure the person has a valid travel document,” Nowel said at the time.

“It added an unnecessary amount of stress on Alejandra on what was already one of the worst days of her life,” she added.

Soto sent bipartisan letters on Wednesday addressed to Trump, the Defense Department and the Department of Homeland Security requesting a stay of removal.

There is an immigration policy for members of the military and their families called “parole in place” to “recognize the important sacrifices made by U.S. Armed forces members, veterans, enlistees, and their families.” The Citizen and Immigration Services website says they provide “discretionary options such as parole in place or deferred action on a case-by-case basis.”

The Juarezes received a call Tuesday from their attorney saying ICE agreed to review her most recent “parole in place” application. But they have rejected her previous three applications, according to Stars and Stripes.

“I love this country. This country has given me great things because we have worked hard. But the America we are living in now is getting full of hate,” Juarez said.

She checked in regularly with immigration authorities during former President Barack Obama’s administration, and says she was always told she is not a criminal and has nothing to worry about.

Now, under Trump’s immigration policy, few exceptions are made for unauthorized immigrants — even in cases when a crime has not been committed.

“Before you enlist in the military, think it twice. Before you marry an immigrant, think it twice. Think if it’s really worth it for you to serve this country, because look how they treated me,” Juarez previously told NBC News, through tears.

She had said that if she were deported Friday, she would take daughter Estela with her to Mexico while her her other daughter, Pamela, stays with her father in Florida.

“It makes me sad, mainly because I tell my mom everything. And she always supports me … And now that I’m getting older I’m going to have more problems and issues that I’m going to need help with and I want my mom to be there with me,” Pamela said.

The parents decided to take the younger daughter to Mexico because Temo travels for work and she is too young to take care of herself.

“I don’t really want to go to Mexico but I know I need to because I’m too young and also I want to go for my mom … because I don’t want her to be lonely,” Estela said.

She went on to say what she would tell Trump if gotten the chance: “I know my mom made a mistake and it was wrong, but he said he was going to deport criminals. My mom is not a criminal,” the girl said. “She is a military spouse and a mom of two kids.”

Reporting by Carmen Sesin in Miami, Anthony Terrell in Tampa and Kissimmee and Erik Ortiz in New York; video by Jesse North.