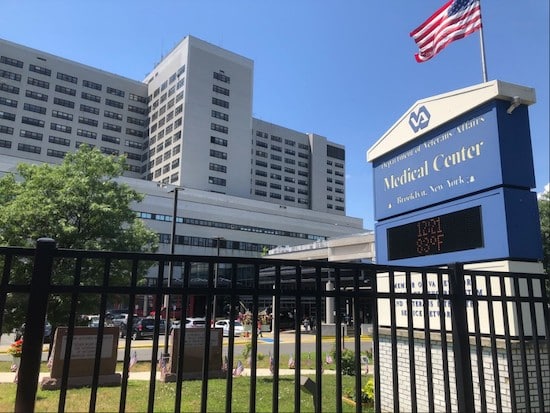 That was the definitive statement made by Director of VANY Harbor Healthcare System Martina Parauda regarding the status of the Brooklyn VA Hospital during a two-hour town hall meeting held on the second floor of the center, 800 Poly Place, on Wednesday, July 18.

The meeting was highly attended with so many people present that several had to stand outside the room just to listen. The objective of the meeting was to answer the questions veterans submitted, many related to the future of the Brooklyn facility.

Some attendees brought signs that read “No Closures at Brooklyn VA Hospital,” an issue that Parauda addressed right away.

“I don’t need the signs. There’s no closure of Brooklyn VA Hospital,” she said. “There are no plans to close. I’m not lying about that. I’m here to have an open, factual discussion.”

“(Our plans are) to remain open both as an inpatient and outpatient facility,” Parauda stated. “There are no plans to close. That is a rumor that, for whatever reason, keeps on going on and on. “


Short-range plans include renovating the operating rooms to recreate them for the 21st century (a project that should be completed by October); ambulatory surgery suites, slated to be finished by January, 2020, and a women’s health clinic that is due for completion by November of this year.

The outpatient building will be getting a new roof; that should be completed by 2020 as well.

In addition, patients can expect more cosmetic updates, such as new furniture, especially in the lobby and outpatient clinics.

“In May, we moved the domiciliary from our Saint Albans campus to the renovated building 2 across the parking lot to accommodate 40 veterans there,” she said. This occurred, she said, because, “Brooklyn’s campus lent itself more to a complete renovation and had a free standing building in building 2 and we were able to convert the rooms to single and double bedded rooms. At Saint Albans, they were three or four-bed rooms which isn’t state-of-the-art care for anybody.”

There were points when the meeting got heated, especially when addressing the ENT Clinic, which veterans thought was going to be closed because a sign had been posted to that effect.

Parauda tried to clear the air, recalling that SUNY Downstate, which provided residents to the clinic, had informed the facility in December, 2017, that it “would no longer provide ENT residence to the Brooklyn campus effective on July 1. It doesn’t say why they pulled out in the memo. The medical staff here worked with SUNY Downstate to try to get them to continue to stay here. They said no.”

It snowballed from there, with staffers at the clinic resigning after it became clear that SUNY Downstate would not reconsider. At that point, in March, Parauda said, the facility began a nationwide search for ENT physicians, nurse practitioners and medical assistants. “We never closed the ENT clinic,” Parauda affirmed, noting that, since the end of SUNY Downstate’s residency program, it has been open on Mondays and Thursdays, with an ENT surgeon poised to start there shortly.

Parauda also said she would be meeting with the dean of SUNY Downstate on August 6. “You can burn me once, but you can’t burn me twice,” she said. “What else are you planning on pulling? I have to know now to make plans sooner rather than later to provide services for veterans. I have no intention of closing any program here at Brooklyn but I also can’t have it pulled out from under me so I’m scrambling to try to continue those services.” In addition, she said, “We have been reaching out to others seeing if we can partner up.”

However, founding director of the New York City Veterans Alliance Kristen Rouse, reminded Parauda of the sign. “We appreciate that you responded to the public pressure and have kept the ENT clinic open two days a week instead of closing it as the sign on the clinic stated,” she said.

“I didn’t put up the sign in the clinic,” Parauda answered. “I’ve been upfront from the beginning. What has been misconstrued is my story.  When I learn there was a sign up at the ENT clinic saying it was closing I myself took down the sign because it wasn’t true.”

Nonetheless, State Senator Marty Golden, who was in attendance, later said, “If somebody in my office put up a sign that wasn’t authorized, then that person would not be working for me. That person will be fired.”“I have no idea who put up the sign,” Parauda responded.

“If someone in my office put it up, then I am still responsible for it. You are responsible.”Golden said.

However, some came to Parauda’s defense.

“She took every question from the minutiae to the big issues,” said Vietnam veteran Bob Greene. “There are many issues we have in the VA and she is trying to address all of them. I think we’re lucky to have a director like this. She’s dealing with resource issues. She’s trying to juggle a lot. This is not a perfect system but we have to recognize this is a world she didn’t make and she is dealing with forces way out of her control.

“Having said that, we have to sort out for ourselves as a community what kind of impact we can have, and I know I want to send to the powers-that-be the message that we’re a united community,” Greene added.