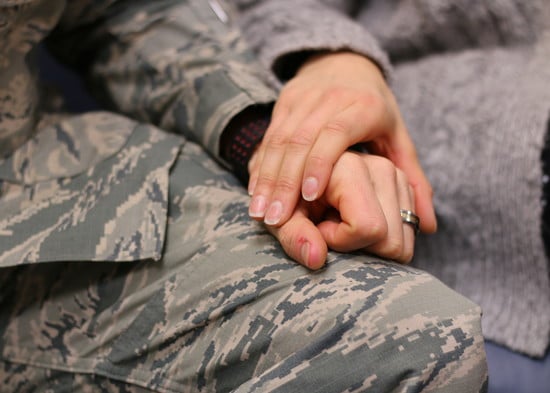 WASHINGTON — It’s not just the military that potentially received a big boost from the defense authorization bill that passed the U.S. Senate this week. The economic outlook for military spouses did, too.

Included in the National Defense Authorization Act, which passed by a vote of 85-10, was a bipartisan provision that would make it easier for military spouses to find jobs when they are forced to pick up and move.

Husbands and wives of members of the military have a national unemployment rate up to four times the national average and face numerous challenges finding jobs.

Sen. Tim Kaine, D-Va., sought to change that after hearing from spouses in his state, which has one of the highest number of service members in the nation. Kaine said he heard story after story of spouses who had problems finding jobs due to a lack of child-care options, bureaucratic obstacles and lack of support during multiple redeployments and repeated relocations.

“The real stars of this were the spouses — the men and women who said, ‘let me tell you about this story,’” Kaine said in an interview with NBC News. “I really feel like they wrote the bill. We just were the note takers who put it into legislative language, found colleagues and introduced it.”


The bill provides for preferential hiring at federal agencies similar to what veterans receive in addition to financial support for job training and re-credentialing in a new state, breaking down barriers to starting business on base, and expanded access to childcare. And when a service member is being transitioned out of the military, the measure allows spouses to sit in on counseling and planning sessions, something that is currently barred.

“Families are the backbone of the military,” Sen. David Perdue, R-Ga., said in a statement. “That’s why we took steps in the defense bill to help provide employment opportunities for military spouses by expediting the interview process, increasing the education potential, and encouraging entrepreneurship.”

Lakesha Cole is one of 640,000 active-duty members of the military who benefit from the change, 92 percent of whom are women. A mother of three who has gone through six deployments and five base transfers as the spouse of a Marine, she said each move was challenging and posed a new set of challenges, especially in her career.

Cole, 37, said that it was exhausting to “reinvent myself every time I had to pick up and move.”

“I think this is going to be a bipartisan win that will help us start to do what we did five years ago with veterans unemployment — chip away at it,” Kaine said.

The measure still must pass the House before it can be signed into law.