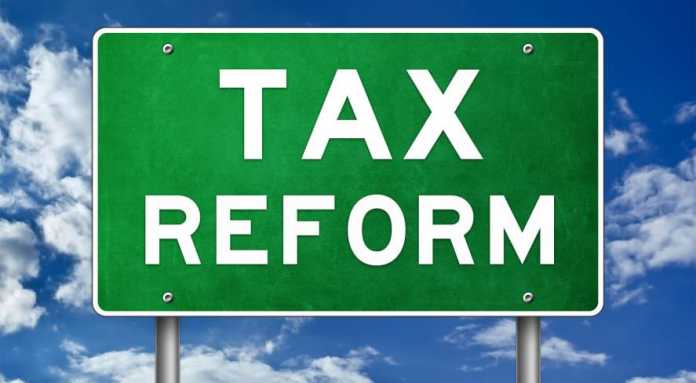 We’ll circle back to Apple’s “crumbs” (now I’m hungry) in a moment, but first, a note we missed a few weeks ago from Travelers:

The insurance giant announced its decision to pay out $1,000 bonuses to approximately 14,000 eligible employees who earn less than $75,000 annually.  The company will also standardize a $15 hourly per hour wage for its “small number” of hourly workers who currently make less than that.  The CEO of Travelers directly credited the new tax law for these results.  “[Alan] Schnitzer said the new tax law will spur economic growth, which will benefit Travelers and other companies,” the Hartford Courant reported.

As for Apple, we covered the company’s announcement of a massive injection of capital into the US economy and its plans to create at least 20,000 new jobs on both yesterday and this morning.  And if those developments weren’t enough, the tech behemoth has also unveiled plans to sump aboard the ‘tax reform bonus’ bandwagon:

‘CRUMBS:’ In addition to injecting $350B into US economy and creating 20k+ new jobs, Apple announces $2500 bonuses to their employees. The cataclysmic parade continues…https://www.bloomberg.com/news/articles/2018-01-17/apple-is-said-to-give-employees-2-500-bonuses-after-new-tax-law …

Apple Inc. told employees Wednesday that it’s issuing a bonus of $2,500 worth of restricted stock units, following the introduction of the new U.S. tax law, according to people familiar with the matter. Apple confirmed the bonuses in response to a Bloomberg inquiry Wednesday.

The Cupertino, California-based company joins a growing list of American businesses that have celebrated the introduction of corporate-friendly tax law with one-time bonuses for staff. AT&T Inc., Comcast Corp., JetBlue Airways Corp. and Wal-Mart Stores Inc. also said they were giving bonuses…In an email to employees reviewed by Bloomberg, Apple Chief Executive Officer Tim Cook said the move demonstrated his “confidence in Apple’s future” and that both full-time and part-time employees across all departments are eligible.

Apple workers below a senior-level known as director will be eligible to receive stock units. The company has more than 120,000 employees, including those at its retail stores.


Apple stock is a valuable commodity, so that’s a very nice windfall for tens of thousands of “both full-time and part-time employees,” including retail workers.  Bloomberg’s report on the bonus bonanza includes this extra tidbit: “Cook also said Apple would contribute twice the amount of each employee’s charitable donations, up to $10,000, through the end of the year.”  A barely-noticed charitable boon, to boot.  Senate Republicans have published a roundup of this whirlwind of Democrat-discrediting good news, with a more comprehensive list being tabulated by Americans for Tax Reform.  They’d pegged the number of US workers already benefiting from the tax law at over two million, and that was before Apple added roughly 120,000 more people into that happy pot.

Majority Leader Mitch McConnell has been touting these developments in a series of regular floor speeches.  Here’s his latest:

The world is noticing that America is open for business. And in large part, it’s because we have shaken off an outdated, burdensome tax code. “Reforming the tax code was not easy. It was made even more challenging when none of my Democratic colleagues in the House or the Senate – not one – stood with taxpayers and job creators to vote for this once-in-a-generation tax relief. But thanks to Republican majorities in Congress and a Republican White House, the benefits for working Americans are just beginning.”

May that bold-font fact be repeated endlessly — especially as millions of Americans are surprise by the tax cuts they don’t realize they’re about to receive.  Shortly after the bill passed last month, pro-reform groups pledged to launch advertising blitzes aimed at improving flagging public perceptions of the law.  Now they’ve got momentum on their side, and plenty of positive material to highlight.  I’ll leave you with the latest news on this front: 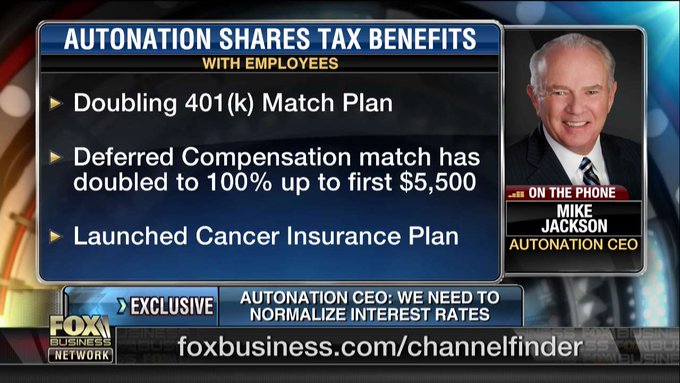 @AutoNation @CEOMikeJackson announced that the company will double its matching contributions to employees’ 401(k) plans, increase its deferred compensation match to up to 100% for the first $5,500, citing the tax reform bill. http://fxn.ws/2DjFyqq

Guy Benson is Townhall.com‘s Political Editor. Follow him on Twitter @guypbenson. A Fox News contributor, Benson is co-author of the 2015 book, End of Discussion: How the Left’s Outrage Industry Shuts Down Debate, Manipulates Voters, and Makes America Less Free (and Fun).