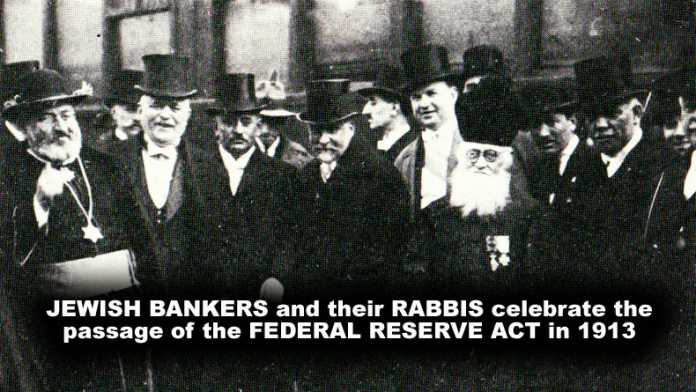 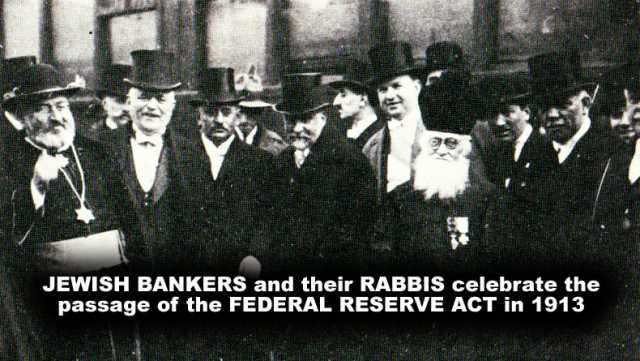 Any discussion on the Federal Reserve inevitably will revert into the role of Jewish Bankers in the failures of the central bank. Resistance from the current Jackals of Jekyll Island prevents a Federal Reserve audit. The identity politics that absorb the banking elites usually revolves on money. However, when the financial establishment unites to shield the Fed to protect the likes of Greenspan, Bernanke and Yellen, one needs to ask why are Jewish Banksters put in charge of the central bank? Identity politics of the tribe comes to the rescue. The mere notion of asking such a question requires a slap down and charges of hatred.

Folks, now you have seen everything. Never being a shrinking violet, BREAKING ALL THE RULES has always addressed the most controversial issues. Coming across the Facebook page, Jews for the Preservation of the Federal Reserve, provides the very definition of chutzpah. While the content is sparse, the sentiment verbalizes what is left unsaid in polite company. Either the author is the worse public relations practitioner for the cartel or the most truthful Zionist making a confession we all know to be factual.

The description states: “Combating Anti-Semitic attacks and conspiracy theories against the employees of the Federal Reserve.” Gee that is an idea for a Hollywood screen play or a reality show. While a free and open debate is long overdue, the sentiment expressed and summed up in the header image is shocking.

Avoiding the charge of racism or religious prejudice, the full sensation of viewing this graphic can be seen on Facebook or on the following link. Frankly, this visual epitomizes in one picture, an admission that the ADL ineptly denies in Jewish “Control” of the Federal Reserve: A Classic Anti-Semitic Myth.


Several JPFR posting quotations speaks so loudly only a fool would deny the media silence about the actual reality and oversight of the Federal Reserve is now openly flaunted.

“Under German law, public comments inciting violence against a particular group on religious or ethnic grounds are punishable by up to three years in prison; convicted Holocaust deniers face up to five years.”

April 3 – “It appears we have at least one bigoted anti-Semite operating withing the Federal Reserve disclosing confidential information. It’s time Janet Yellen cleans house and bring this traitor to justice. What do you think?” (see link)

February 9 – “We at the JPFR are saddened that Senator Rand Paul thinks he has the right to audit the Federal Reserve. We have some advise for him: stay out of our business!” (see link)

February 5 – “The JPFR is shocked and appalled by an anti-Semitic story published by the Jewish Daily Forward that points out in a thinly-veiled manner that Jews control the Federal Reserve. We are calling on this “news” agency to pull the story.”

It would be easy to dismiss this JPFR source as a sick attempt at satire, but the frightening implication is that the privately owned central bank is well known within Jewish circles to be under the mastery of banksters, dedicated to maintain Jewish supremacy for the Preservation of the Federal Reserve.

Who exactly profits from the debt created money scheme that is the basis of central banking system of fractional reserve lending? In order to understand this struggle, a historic account is needed. For purposes of fairness, the article in The Jewish Story Behind the U.S. Federal Reserve Bank by Roger Lowenstein and published in Forward, acknowledges that Paul Moritz Warburg was instrumental.

“Warburg had stumbled upon the original American conflict, debated first by Hamilton and Jefferson, of federalism versus anti-federalism. Indeed, the young republic twice experimented with a national bank, and even though each attempt was successful, each of these banks was abandoned.”

The claim that “each attempt was successful” begs the question: Successful for whom?

“After his death in 1932, the Fed became a frequent target of anti-Semites, bank haters and conspiracy theorists. Its opponents today are more mainstream. But they are still ideologically motivated.”

Examine the historic evidence in PROOF that JEWS control the FEDERAL RESERVE, and ask why proponents of the Federal Reserve express their indignation by shouting anti-Semitism, when the record is clear that Jewish bankers, in the service of the Rothschilds, were the architects and originators of central banking.

Need more proof? Review the essay; The History Of The House Of Rothschild and deal with the facts. So when Mr. Lowenstein states that the “Fed became a frequent target of anti-Semites”, maybe he is confusing the record from events with a bias to defend the indefensible.

In order to understand the motivation behind labeling the most adamant critics of the Federal Reserve as harboring hostility towards the role that Jews play, one needs to explore Jewish identity politics. Read the Expert Testimony on Jewish Identity Politics by Gilad Atzmon, who is no stranger to controversy.

Years of studying of Jewish identity politics led me to the conclusion that we are dealing with three non-exclusive categories.

A: The Religion – people who identify as Jews because they believe and follow the Torah/Talmud. Ladies and gentlemen-this category is innocent. The history of hundreds of years of rabbinical Judaism proves that orthodox Jews have never been involved in a genocidal act against another people.

B: Ethnicity – people who identify as Jews due to ancestry and family lineage. Ladies and gentlemen, this category is also innocent. Having a Jewish mother doesn’t make one into a war criminal!

C: Politics – those who identify politically as Jews. Ladies and gentlemen, unfortunately, this category is far from innocent. Zionism-the promise to bring about a Jewish homeland in Palestine was executed at the expense of another people: namely the Palestinians. But Zionism is not alone. In fact all forms of Jewish politics are racially exclusive. Ask yourself, can Mr. Topham or any other ‘Goy’ (gentile, non-Jew) in this room join the group ‘Jews for Peace’ or ‘Jews for Human Rights’? The answer is NO. And why? Because the Goyim in the room are not racially qualified. The conclusion is inevitable. The 3rd category is racially oriented and to a certain extent, racist to the bone.   ‘Jews for peace’ is in practice as racist and exclusive as “Aryans for Palestine” or “Whites for free love.” And yet, most of us would react angrily to White only clubs but we are somehow forgiving when it comes to Jews only associations.

The politics of tribal Zionism is the driving force behind placing the Federal Reserve above any scrutiny. The central bank is their baby and in the immutable words of JPFR “stay out of our business!”

There is nothing anti-Semitic about a national debate on money and the central banking system that has enslaved the civilized world. The Federal Reserve can no longer be the playpen of a cabal of identity usurers, who object to be called shylocks; while their money changer practices steal the life blood from our country.

Free speech is a two way highway. Jews for the Preservation of the Federal Reserve can argue their case for a privileged position in the creation of money, the issuance of credit and the management of the economy. Notwithstanding, their threats to smear and intimate the ‘Goy’, will no longer work.

In a civil society, charges of hate speech require a much higher standard than questioning the motives of banksters. No matter what category of Jewish identity, the toadies of the Fed fall into or their non-Jewish lackeys and sympathizers represent, they all share the same objective. Keep and safeguard their money fraud.

Identity politics differ among various groups based upon the culturally correct clout a faction has over the political environment. No more relevant observation can be made than from George Salamon in the article, Wall Street and Jewish Ethical Identity.

“It’s in this idolatrous, commercial society America’s Jews have gained insider status. The good news is therefore the bad news as well. Alan Dershowitz, who never misses an opportunity for a bit of hyperbole, said about today’s American Jews: “We are the WASPs.” Larry Summers explained to Elizabeth Warren just what such insider-ness means: “Insiders (also) understand one unbreakable rule: They don’t criticize other insiders.”

The Federal Reserve System of financial manipulation is the ultimate tool of crony capitalism.

Just maybe the cryptic mindset is not so secret any longer. If this is true, the sentiment in Jews for the Preservation of the Federal Reserve should become the title for financial broadcasts on CNBC. The love feast in the reporting on money is as intolerable towards hard and sound money proponents as any race baiting claims of anti-Semitism directed at critics of Zionism.

Secrets of the Temple are essential for the protection racket of the Bankster crime syndicate to operate their exploitation theft. This naked truth cannot be censored any longer.