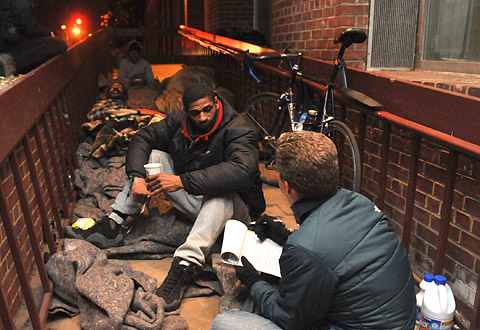 Last year, VA provided about $100 million to assist about 50,000 Veterans and their families.
by Hans Petersen, VA staff writer

VA has awarded nearly $300 million in grants to help approximately 120,000 homeless and at-risk Veterans and their families.

The program reaches out to homeless Veterans and their families everywhere in America. A sampling from the four corners of the lower 48:

The grants have been awarded to 319 community agencies in all 50 states, the District of Columbia, Puerto Rico and the Virgin Islands.

With these grants, VA is strengthening the partnership with community non-profits across the country to provide Veterans and their families with hope, a home and a future.

The federal government’s goal is to end Veterans homelessness in 2015.

The VA program is called Supportive Services for Veteran Families (SSVF) and has already helped prevent and end homelessness among tens of thousands of homeless Veterans and their families.

Under the SSVF program, VA is awarding grants to private non-profit organizations and consumer cooperatives that provide services to very low-income Veteran families living in — or transitioning to — permanent housing. The SSVF program supports VA’s efforts to prevent at-risk Veterans from becoming homeless and rapidly re-house those who have recently fallen into homelessness. Reaching out to homeless Veterans everywhere.


Thanks to the SSVF grants, those community organizations will provide a range of services that promote housing stability and play a key role in connecting Veterans and their family members to VA services such as mental health care and other benefits. Community-based groups can offer temporary financial assistance on behalf of Veterans for rent payments, utility payments, security deposits and moving costs.

This is the third year SSVF grants have helped Veterans and their families find or remain in their homes. Last year, VA provided about $100 million to assist approximately 50,000 Veterans and family members.

In 2009, President Barack H. Obama and Secretary of Veterans Affairs Eric K. Shinseki announced the federal government’s goal to end Veterans’ homelessness in 2015. The grants are intended to help accomplish that goal. According to the 2012 Point-in-Time Estimates of Homelessness, homelessness among Veterans has declined 17.2 percent since 2009.

Through the homeless Veterans initiative, VA committed over $1 billion in fiscal year 2013 to strengthen programs that prevent and end homelessness among Veterans. VA provides a range of services to homeless Veterans, including health care, job training, and education.