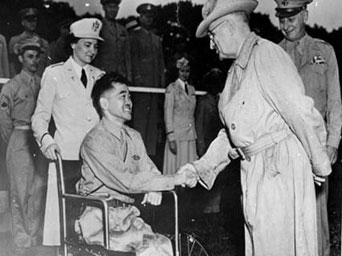 Even the most powerful man in the western hemisphere, the United States president, doesn’t always get his way.

Such was the case with President Harry S. Truman. He was a humble, yet headstrong, man who made it known on many occasions that he never wanted buildings named after him. But, just as former President Franklin D. Roosevelt didn’t have any say when President Truman named the Montrose VA hospital after Roosevelt months after his death in 1945, so it was with President Truman when a Veterans Administration hospital was named in his honor.

In 1950, in the midst of President Truman’s second term, the first attempt was made to designate a new Veterans hospital in Brooklyn, New York, after him, but he bristled. Not until 25 years later would that mission be successfully accomplished. Harry S. Truman was the first of two World War I Veterans to become an American president.


Harry S. Truman was the first of two World War I Veterans to become an American president; Dwight D. Eisenhower was the second. When Truman assumed that office after President Franklin D. Roosevelt died (just a few months into his fourth term), he was the first military Veteran in nearly 40 years to serve as U.S. president. The last military Veteran elected president before Truman was Teddy Roosevelt, a Spanish American War Veteran, who served from 1901-1909. Harry Truman was re-elected president for a second term in 1948 and served as the 33rd U.S. president from 1945-1953.

Prior to becoming president, Harry Truman served in the Missouri National Guard from 1905 to 1911; from 1917 to 1919 he served in the 129th Field Artillery and commanded Battery D during World War 1; he was promoted to the rank of Captain.

President Truman was a descendant of Revolutionary War 1st Lt. James Holmes, 2nd Virginia State Regiment, and was approved for membership in the National Society Sons of the Revolution in 1967. He was also a member of the following Veterans’ organizations: Veterans of Foreign Wars, American Legion, Reserve Officers Association of the United States, Army and Navy Club, 35th Division Association, Military Country Club, and Military Order of the World War.