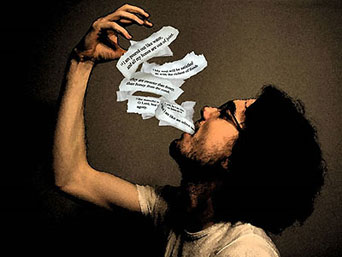 The current issue of The Iowa Review, a literary magazine based at the University of Iowa, contains writing by 11 military veterans and active-duty personnel. This issue, volume 43, number 1 (Spring 2013), will be on newsstands through August.

The centerpiece of the issue is a series of poems by Iraq War veteran Hugh Martin, winner of the 2012 Jeff Sharlet Memorial Award for Veterans. The contest was held by The Iowa Review and sponsored by the family of Jeff Sharlet, a Vietnam War veteran and antiwar writer and activist.

Hugh Martin’s poems link a variety of moments, from accidentally breaking an Iraqi woman’s dinner plates during a raid to returning home and being asked serious questions about the war by a stripper in a Las Vegas club. In both these encounters, the poet relates, the women refuse his money.

“I was keenly moved by the depth of feeling and high quality of writing by these veterans,” said Robert Olen Butler, a Vietnam veteran and Pulitzer Prize–winning writer who was the judge for the Sharlet Award. “The best of what I read was not, in its essence, the work of veterans; it was the work of artists.”

In fact, it was so hard to choose just one winner, said Iowa Review editor Russell Valentino, that the editors decided to present not only the winning entry but also the work of ten other finalists.

This work ranges from a darkly humorous story, “Charybdis,” in which a returned Iraq veteran begins patrolling a sleepy suburban neighborhood in Virginia, unearthing the secrets of its residents, to a poem, “Vermeer in Hell,” that meditates on the bombing of Dresden in World War II.

Despite the contest having been open to any subject matter, certain topics recur frequently in the issue, said managing editor Lynne Nugent. “The most common themes were the plight of civilians in a war zone, the difficulty many veterans have resuming ordinary life after their return home, and the effects of post-traumatic stress disorder,” she said.

The art on the cover is from the Combat Paper Project, an organization that conducts workshops teaching veterans how to make paper artwork from their old uniforms.


The next Sharlet Award will have a deadline of May 15, 2014. Rules will be posted at iowareview.org.

The Iowa Review is based in the Department of English, College of Liberal Arts & Sciences, University of Iowa. It publishes three print issues per year featuring poetry, fiction, and literary nonfiction. Work from its pages is consistently selected to appear in such anthologies as Best American Essays, Best American Short Stories, Best American Poetry, The Pushcart Prize: Best of the Small Presses, and The PEN/O. Henry Prize Stories.

More information about The Iowa Review, including how to subscribe, purchase individual issues, or find the current issue in a bookstore, can be found at iowareview.org.