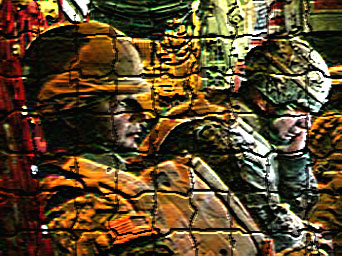 While post-traumatic stress disorder (PTSD) is often associated with Service members and veterans, affecting an estimated 11 to 20 percent of Service members after a deployment, eight percent of the U.S. population at large will be affected by PTSD in their lifetime. The observance of June as PTSD Awareness Month helps highlight this issue of national importance.

PTSD is an anxiety disorder which may occur after experiencing a traumatic event such as combat exposure, physical or sexual assault or a serious accident, and may result in symptoms ranging from chronic sleep problems to irritability and hyper-vigilance. Not all Service members or veterans suffer from PTSD as a result of their military service, and those Service members who do experience PTSD are rarely dangerous to themselves or others, as the stereotypes imply. As President Obama recently noted in his remarks at the National Conference on Mental Health, “the overwhelming majority of people who suffer from mental illnesses are not violent.  They will never pose a threat to themselves or others.”

PTSD can still impact a Service member’s successful recovery and transition, however, particularly in the area of employment. Many organizations, such as the White House’s Joining Forces initiative, GE’s Get Skills to Work coalition, and the US Chamber of Commerce’s Hiring Our Heroes program have made great strides in improving Service member and veteran employment outcomes, but myths and misperceptions about Service members and veterans with PTSD still persist. Campaigns such as the Army’s “Hire a Veteran” have been launched to debunk these myths, and additional information about PTSD is available from sources including the Defense Centers of Excellence (DCoE) and others.

Another important component of addressing PTSD is to ensure that it is properly diagnosed and treated. In his speech, President Obama also noted that “less than 40 percent of people with mental illness receive treatment — less than 40 percent. We wouldn’t accept it if only 40 percent of Americans with cancers got treatment.  We wouldn’t accept it if only half of young people with diabetes got help.  Why should we accept it when it comes to mental health?  It doesn’t make any sense.”

If you are, or know of, a Service member in need of help or treatment, resources from the National Resource Directory (NRD), the DCoE’s Real Warrior’s Campaign and the Department of Veterans Affairs (VA)’s National Center for PTSD, are excellent  places to start. In addition, stay tuned to this blog, as well as our Facebook and Twitter pages for more information and tips about PTSD throughout the month. Remember, if you or someone you know is struggling with PTSD, you are not alone!