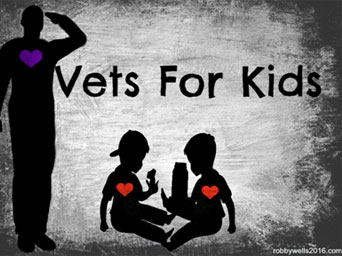 In the wake of the tragic events that have taken place in Aurora, Colorado and Newtown, Connecticut, it is time for every law abiding citizen to take action in order to secure the ones that we love.

That is why today, I am introducing my plan called “Vets for Kids.” For a minimal cost, every school in the nation can employ armed Veterans to secure our children from psychopathic criminals that target schools because they are considered “No Weapon Zones.”

This is a common sense solution that will give parents the peace of mind of knowing that their children are safe at school. This solution will also give thousands of unemployed Veterans the opportunity to once again provide for their families. Who better to protect our children than our Veterans who served to protect every American while they actively served? This program, “Vets for Kids,” should be adopted on the local and state level. Now is the time to secure our children, who are the future generation.

We do not want to add to the taxpayers’ burden.  Say you put one Veteran in a school for every 400 kids.  If a school has 1,200 kids, there would be three Veterans working there.  If each parent paid 25 cents a day into this program, there would be $100 a day to pay each Veteran.

ABOUT THE AUTHOR and VETS FOR KIDS:  2016 independent presidential candidate Robby Carr Wells is a Veteran, as are many of his volunteer campaign staffers.  Veterans’ issues are at the forefront of our efforts.  Our platform is focused on protecting Americans’ constitutional rights and restoring our republic.

We have started a program to place an armed Veteran in every American school in order to protect our children and assure them peace of mind in the wake of the Sandy Hook shooting – while at the same time preserving our second amendment rights.  This program is called “Vets for Kids” and is meant to be implemented on a local level.


We are also trying to draw attention to Sergeant Bowe Bergdahl, who was captured by Taliban forces in Afghanistan in June 2009 and remains a prisoner of war.  Mr. Wells has pledged to take action to bring Bowe home as quickly as possible beginning with his first day in office.

Our campaign theme is “Rise Up.”  Our website is:  RobbyWells2016.com.

Our campaign team is growing all across the nation and is forming partnerships with many different groups and parties that are based on the Constitution and are fed up with the nonsense in Washington DC.