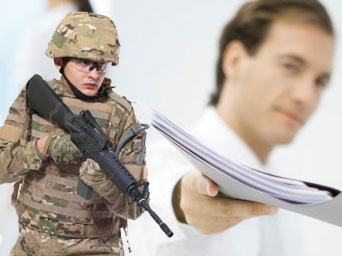 TucsonCitizen.com – With the mindset of the Tea Party folks we have created a schizoid situation that will resolve itself with some common sense.

You cannot spend every waking hour slamming the government, and then in the same breath blame them for not taking care of veterans.

The VA did not plan, nor budget for 14 years of wars. Who did that? I believe Donald Rumsfeld told us it would be a “cake walk,” and over in a few months.

So, I would say the Veterans Administration is dancing as fast as they can. It takes two years to train a V.A Rating Officer. Many are just now coming on board.

Our beloved Main Stream Media are also masters at partial reporting. I suspect it is for lack of research staff and speed at which they need to get to market.

When it comes to the VA, they seem to leave out all back story and all delineations of the problems, and focus on what the fraternal veterans organizations tell them.

The VFW, American Legion, Disabled American Veterans, Vietnam Veterans of America, Marine Corps League, are all very fine advocates for the veteran, but they too leave out the nature of the problem and focus on all that is bad. That is how they show advocacy and create agenda items for conventions. I am a member of all of them, and want them at my side. I would encourage them to show more context and history of the problems with the disability claim process, so as to lend some perspective to readers and listeners of the news.


It has recently been reported that the wait for a claim to be processed is 262 days. Given, that it may decide the balance of your life, is that all bad?

There was a time when it was five years! And now we have an onslaught of Vietnam Veterans who are entering the system with Agent Orange illnesses that have been ignored for 40 years. Is that not a good thing?

If you had 9000 thousand people show up at your Church on Sunday, I guess you may have a backlog eh? Is that not a good thing?

Soldiers and Marines who have been severely injured and known to have permanent disabilities, can now begin their claim six months prior to their discharge. So hear this, they are not veterans yet. Some are still in Walter Reed Hospital, which is an Army Hospital, not a VA Hospital. They are still on Active Duty.

These folks are counted in the backlog, yet their discharges are delayed, which adds to the pile up of claims. No one in the MSM reports this debacle.

So lets participate in the problem solving process, rather than incessantly ragging the VA. Our returning veterans of war will appreciate a more positive approach and outlook from the citizenry they defended.

WASHINGTON – The Department of Veterans Affairs announced today it is implementing an initiative to expedite compensation claims decisions for Veterans who have waited one year or longer. Effective today, VA claims raters will make provisional decisions on the oldest claims in inventory, which will allow Veterans to begin collecting compensation benefits more quickly, if eligible. Veterans will be able to submit additional evidence for consideration a full year after the provisional rating, before the VA issues a final decision.

“Too many Veterans wait too long for a decision, and this has never been acceptable,” said VA Secretary Eric Shinseki. “That is why we are implementing an aggressive plan to eliminate the backlog in 2015. This initiative is the right thing to do now for Veterans who have waited the longest.”

Provisional decisions will be based on all evidence provided to date by the Veteran or obtained on their behalf by VA. If a VA medical examination is needed to decide the claim, it will be ordered and expedited.

“Issuing provisional decisions not only provides Veterans with applicable benefits much more quickly, but also gives them an additional one-year safety net to submit further evidence should it become available. Our door will remain open and if a Veteran has additional evidence, their case will be fast tracked,” said Allison Hickey, Undersecretary for Benefits.

If any increase is determined to be warranted based on the additional evidence received, benefits will be retroactive to the date the claim was initially filed. The initiative protects the Veteran’s right to appeal the decision. If no further evidence is received within that year, VBA will inform the Veteran that their rating is final and provide information on the standard appeals process, which can be found at http://www.bva.va.gov/

Throughout this initiative, VA will continue to prioritize claims for homeless

Claims for Wounded Warriors separating from the military for medical reasons will continue to be handled separately and on a priority basis with the Department of Defense through the Integrated Disability Evaluation System (IDES). Wounded Warriors separating through IDES currently receive VA compensation benefits in an average of 61 days following their separation from service.

As a result of this initiative, metrics used to track benefits claims will experience significant fluctuations. The focus on processing the oldest claims will cause the overall measure of the average length of time to complete a claim—currently 286 days— to skew, rising significantly in the near term because of the number of old claims that will be completed. Over time, as the backlog of oldest claims is cleared and more of the incoming claims are processed electronically through VA’s new paperless processing system, VA’s average time to complete claims will significantly improve. In addition, the average days pending metric– or the average age of a claim in the inventory – will decrease, since the oldest claims will no longer be part of the inventory.

While compensation claims are pending, eligible Veterans are able to receive healthcare and other benefits from VA. Veterans who have served in recent conflicts are eligible for 5 years of free healthcare from VA. Currently, over 55% of returning Iraq and Afghanistan Veterans are using VA health care, a rate of utilization greater than previous generations of Veterans.

Veterans can learn more about disability benefits on the joint Department of Defense—VA web portal eBenefits at: https://www.ebenefits.va.gov/ebenefits-portal/ebenefits.portal