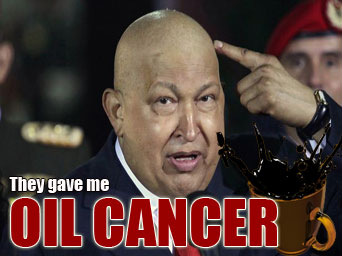 Natural Resources Up For Grabs!

The evidence is all over Bloomberg TV. Previous to Chavez’s death they seemed to have a much less interest in Latin America’s growing economy. It appears that pandora has left the box and the talking heads are able to speak of Latin America in a good light. Now that one of their stiffest economic leaders has fallen to “OIL CANCER” of course.Why else break the silence on Latin America’s gigantic growth in the past 10 years, and the pope being of Latin descent is just the cherry on top.

Well this marks a new era in which the west will begin to invest a great deal in Latin America now knowing that it controls all of its puppet democracy leaders.The money powers of the west had no intentions of moving in until Chavez was gone to ensure their profits are secure and not at risk of confiscation. Shrewd move.

Watch as the west begins to sell more of its overpriced Chinese manufactured/American company patented gadgets and automobiles to Latin America. We must also look for the west to continue its sale of consumerism and loan ideals that inevitably lead to a country in debt. This way the giant corporations can buy up the Latin American countries valuable natural resources at below market price.


Of course this is nothing new and has been going on for decades. This is just the marking of a new era of exploitation in which they enter in a more banker style throw-down as opposed to brute force that they so often used in the past.